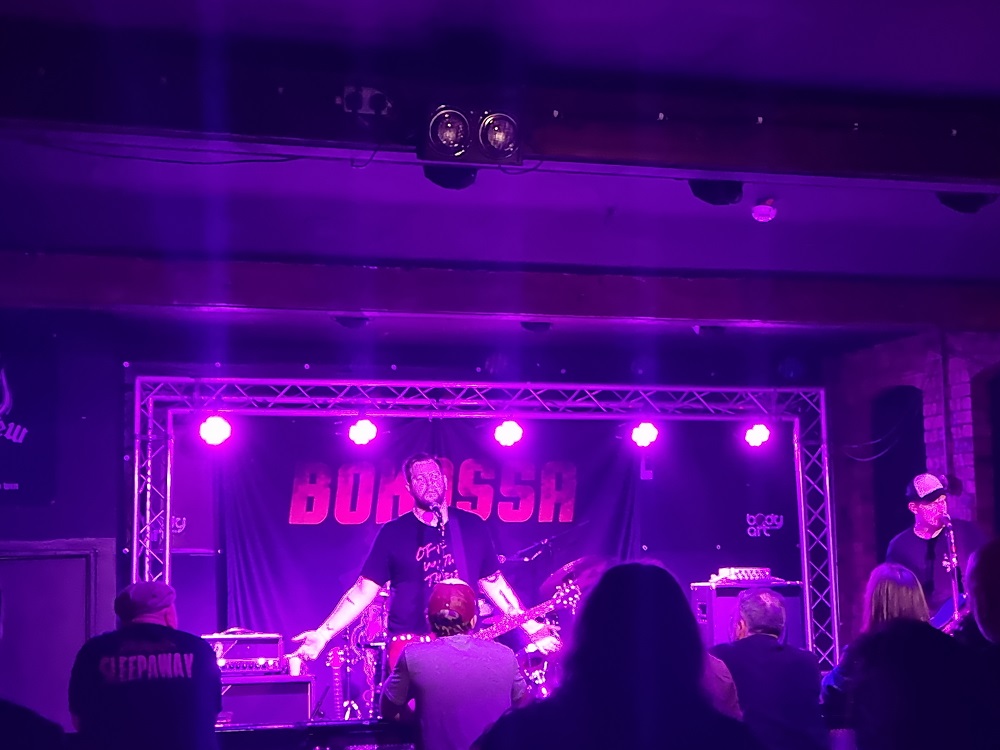 Sometimes you can sense that a band is ready. Ready to make their statement. “Weight Of The World”, Florence Black’s debut album has been out for month or so, and the three know it’s a belter. Not even the fact they lost lights and vocals during “Same Again” can stop them. Tristan Thomas meets the adversity with a simple “this is fun, innit Wolverhampton?” When the power does come back, he exclaims “we’re back live!” And you know he doesn’t mean it in this way, but nonetheless you can’t help but reflect on the fact that these are type of bands that have been robbed of 18 months – and my goodness, how they want to make up for it. “Inside Out”, “Sun And Moon” and the rest are mighty. And FB are fabulous for the fact they don’t fit in. They aren’t a metal band, they aren’t a hard rock band, but yet they fit in everywhere. They’ve always had that about them, as “Smoke” proves, which is why the cover they do suits them so well. Budgie, were a Welsh band who railed against being “Metal”, and hearing them do a fantastic – and really heavy – version of “Breadfan” it almost feels like a torch is being passed in some way. “We’ll be back” says Thomas, “to do a longer set soon” – and you can bet that it will be special too.

“This I my first ever Carling” offers Olav Dowkes, Bokassa’s drummer, “and its just like England. Bland and boring.” Dowkes, it turns out, is half Welsh (“I was raised to hate the English”) and those words “bland and boring” are pretty much the exact opposite of Bokassa. They are – and I’ll happily argue this with anyone – the best and most exciting metal band that weren’t making records in the 80s.

Seeing them here, for this hour and a half, they are everything that you wanted them to be and way, way more. Jørn Kaarstad, reckons he’s the king of statistics (you sort of had to be there), but he does hit the nail on the head. “I know what you’re thinking, they are heavy, there’s melodic stuff going on, they are stoner, they are punks….but you haven’t died and gone to heaven, its all us.”

He’s basically rendered the rest of the review pointless, because whatever I say next will merely underline that. They are an explosion of energy and fun, we can add that, perhaps, but from the utterly brilliant “Last Night (Was a Real Massacre)” to the ending of “Immortal Space Pirate 3: Too Old for This Sith” (we are not making these titles up) its also clear that one other thing is palpably and totally true: Bokassa are an incredibly original band. There is no band that sounds like them, no band that writes these lyrics.

“Burn it All (P.T.S.D.E.A.D)” is a fabulous example of their new album “Molotov Rocktail” – and by the way, the title track is a punk rock disco here – and the stunning “So Long Idiots”, which has a chorus to die for – one that almost demands to be in stadiums. Now, they aren’t, they are playing the small room at KK’s and it’s a Wednesday in the autumn, but does that diminish their brilliance? Not a bit. Does that mean that the takedown of poseurs that is “Careless (In The Age of Altruism)” is any less of a great song? No. Its still the best song on the best metal album of 2021, whatever happens.

They end with a medley (“or you can call it three songs one after the other” suggests Jørn) which includes a snippet of “Sweet Child O’ Mine” which seems to surprise everyone, but lets cut to the chase here. One of these songs is called “Captain Cold One” and it starts with these words: “I get by, on bare fucking minimum / I survive, on Nickelback and Trivium” and that makes it the most brilliant and bonkers track that you ever heard.

After this, for reasons I can’t fathom, “I’m Still Standing” crackles through the PA and they emerge for the aforementioned “…..Sith” as an encore. And when the dust settles on it all and you try and work out what’s going on, you still cannot. Bokassa are entirely without rules, and they are entirely without peer.

Jørn knows: “We are Bokassa, and we are the best cult band in the world.” He’s right you know. Drop the word “cult” and you are kind of close. The rest of the world needs to catch up.