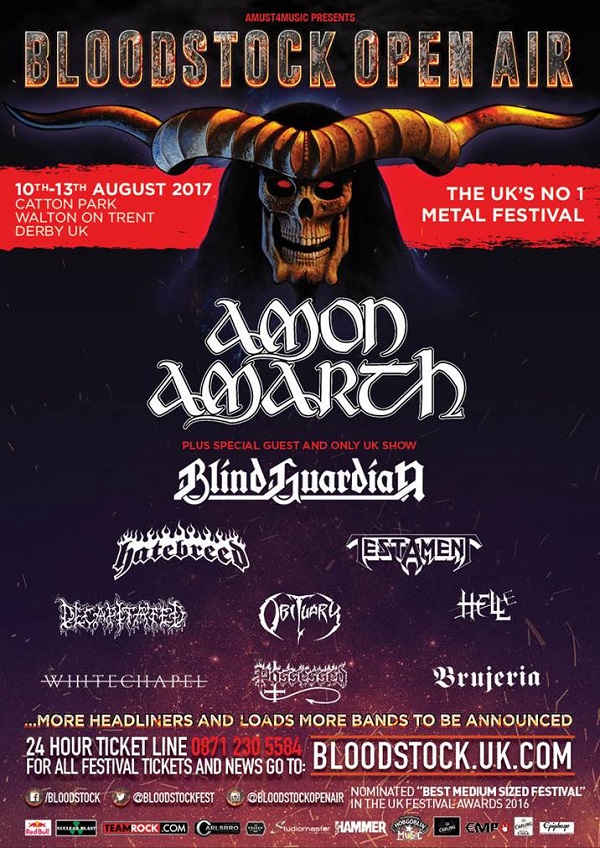 Another set of bands announced

BLOODSTOCK is excited to roll out their next band announcement for 2017 and it’s a brutal one!

Florida death metal kingpins, OBITUARY land themselves a Sunday slot on the main stage.  With a brand new studio album coming in Spring 2017 via Relapse Records, the band recently unleashed the ‘Ten Thousand Ways To Die’ CD, featuring two brand new studio tracks and a full live set from the ‘Inked In Blood’ World Tour.  Check out a taste of what’s to come on that new studio album via brand new track, ‘Loathe’ –https://youtu.be/VI8gz54O-i8 and get excited for their Catton Park set!

Poland’s tech/death-meisters, DECAPITATED are lined up for a Friday slot.  Having delivered some of the most influential death metal of the 21st century, anticipation is high for DECAPITATED’s new studio album set for release in 2017.  Guitarist/founder Vogg tells us, “We’re very excited to be returning to Bloodstock Festival – it will have been three years since our last time.  We’re currently in the studio getting ready to unleash the monster we’ve been working on for the past twelve months and can’t wait to play some Polish metal for our UK fans next Summer!”

Already announced for 2017 are Friday’s headliners AMON AMARTH, plus BLIND GUARDIAN, HATEBREED, TESTAMENT, WHITECHAPEL, POSSESSED and HELL.  Many more are still to be announced!

Early bird weekend camping tix are on sale at a discounted £120 and due to exceptional demand, a limited number of VIP packages were put on sale last month on a first come, first served basis.  This allocation quickly SOLD OUT!  The remaining VIP allocation and a number of VIP upgrades (to accompany previously purchased early bird tickets) and will be available from 16th December, but don’t hang around if you want these, as VIP is set to sell out even earlier in 2017.  Also stay tuned for details of 2017’s ticket deposit scheme (payable over 5 instalments) in just a few weeks time!