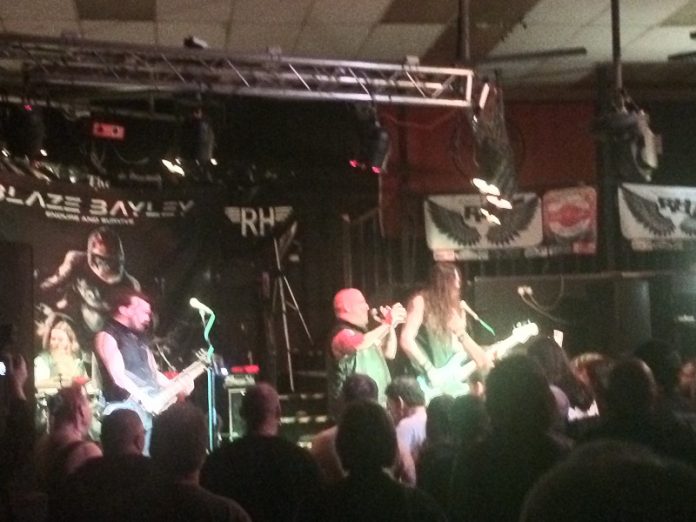 Vowing to “grow old disgracefully” come Stoke’s Quiet The Thief. MV approved Biker Rock, the four piece are sort of what it would sound like if The Almighty and Stone Temple Pilots jammed together over some beers. Which makes them very, very good indeed. They’ve just released a brilliant debut full-length in “Silent Screams”  the set tonight is culled from it. Starting with it’s opener “Numb” is an excellent move, given that it is an insight into their chunky brand of riffery. Current single “Hurricane” is the absolute stand-out moment on “…Screams” and so it is here. “Slow Running Train” (“our one and only” according to singer Stig Chell) was a radio hit and appears on the new album and the EP from a few years ago with good reason, while “Killswitch” boasts a marvellous hook and there’s something downright nasty about “Feed The Wolf.” One of the best underground bands in Britain, Quiet The Thief showed  just why tonight.

“I am Blaze Bayley, and I am here to destroy Birmingham with the power of  metal….” as opening lines go, it’s right up there. He probably means it too.

Born just up the road in Dudley Road hospital, Blaze Bayley remains one of the most vital heavy metal singers on the planet, despite all the ups and downs throughout the last 30 years. And he does so for the reason that there is no one more passionate about this type of music than he is.

He’a damn good at it too. His new album “Endure And Survive” (reviewed next week right here) is just out, but it is one of his very best solo records. Happy to start with two tracks from it. The title track and “Escape Velocity” are exactly how classic British metal should sound in 2017 – and they aren’t the only ones.

“Blood”, perhaps the heaviest thing on the new album, passes at breakneck speed, “Eating Lies” has a real epic feel and all are reasons why the new record is so good.

Where this show scores, though, is that where Blaze has sometimes been guilty in the past of neglecting his own superb material to play songs from his period as the singer of the greatest heavy metal band on the face of the earth (that’s Iron Maiden for the avoidance of doubt), this tour concentrates – for the most part – on the fact that Blaze Bayley has much to be proud of.

“Silicon Messiah” and “Stare At The Sun” are mighty affairs, while “Kill And Destroy” is delivered with the sense of fun that permeates through the evening. Stopping the song because it doesn’t sound like Birmingham wants to kill or destroy, everyone is in on the joke and a bond like the one Bayley has with his crowd is rare.

The Maiden songs that are played – “Futureal”, “The Clansman” (perhaps their most overlooked song) and “Man On The Edge” – are sung with pride, but it is “Man Hunt”, from Blaze’s first band, Wolfsbane that eclipses those. Knockabout fun, it descends into panto farce as the singer tries to stop Chris Appleton, Martin McNee and Karl Schramm (better known as brilliant Brit Metallers, Absolva) from playing their individual solos. That something this daft works so well is testament to Blaze’s unique abilities as a frontman.

There is no one else like him. There never has been before and there never will be again. And as he bids us goodbye with the words:”I’m your Blaze Bayley, I am probably the best looking man in Birmingham…..” you hope he’ll never change.