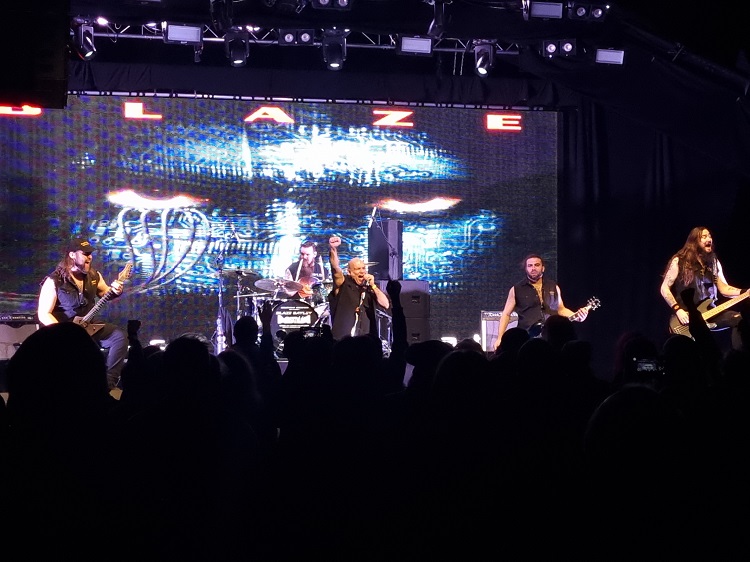 There’s some things you can’t fake. Absolva are about to play their last song, “Code Red” this evening and guitar god/singer Chris Appleton is thanking everyone for coming. That out of the way he exclaims: “let’s fucking have it then!” Its fair to say, judging by his bandmates reactions they weren’t expecting those words, and once the laughing stops, the song begins. That joy at being onstage, at being able to do what they are gifted at, is all the way through this 45 minutes too. Blimey, its been way too long since MV saw them, never mind anything else. The fact remains they are one of the finest metal bands that KK’s Steel Mill will have hosted this year. “Advocate Your Fate” and “Never A Good Day To Die” are as good as it gets, but with four albums there’s plenty of stuff to choose from, and “The Sky’s Your Limit” (“one of our personal favourites” says Luke Appleton, the other guitar player) is a highlight, as is “Never Back Down”, which along with the aforementioned “….Red” are the only songs off the first couple of albums. Clearly then, Absolva are a band looking forward. And with gigs (variants notwithstanding) back, they’ll be back on the stages they belong. Arguably this as good as they’ve ever been.

When Blaze Bayley speaks, it’s always – it seems – from the heart. “I am living my dream, thanks to you. Take your future in your own hands, Wolverhampton!” He says here, and its worth just thinking about that for a minute. His back story would – and has – fill a book, he’s been down, he’s worked in proper jobs, he’s been the singer in the best heavy metal band on the planet and in the last decade, I’d contend that he’s produced his greatest work.

Blaze Bayley is – and this isn’t the sort of thing you’re supposed to write in reviews – a hero of mine. The first band I ever saw give a concert was Wolsbane, his first group. They played Tressines in Birmingham, in the summer of 1991 at a youth rock club. I was nearly 16. And I’ve supported him (note the wording, its deliberate, there was a time when you felt like you were on Team Blaze) and I’d been to many of these Blaze’s Big Bash things over the years. So there’s a feeling of nostalgia watching him here.

That’s not to say there’s a feeling of nostalgia when he plays. There was a whiff of a Maiden Tribute band about him 15 years or so back when you saw him, so much of their stuff did he include. Tonight there’s three. He co-wrote them all.

“Silicon Messiah” and “Kill And Destroy” have probably been in the set that long too, but they sound so fresh here. Maybe because they finally have a band good enough to play them – Absolva are more than just the main support, they are the backing band too. My, how good they are and what chemistry there is. “War Within Me” the title track of this years superb record is your underlining proof.

Having a band that he trusts, allows Blaze to be Blaze, as it were. Yes there’s a bit of Ozzy in his act, but he’s a natural showman, he’s funny and his voice sounds brilliant. Even when he messes up the intro to “Warrior” you are with him, because somehow, you know you’d do it too if you were up there.

If he wasn’t “up there” of course, Bayley would be down here. He’s just a fan, you often see him at shows. That love for the craft comes through on a mighty “Pull Yourself Up” which appears to be BB’s way of reminding himself and you what can be achieved.

“Virus” – one of the most underrated songs of Maiden’s catalogue (and as an aside it is my mission to have the two albums Blaze made with the band revaluated as great records) a real singalong of “18 Flights”, a highlight on the new album and centrepiece here, also gives the band a chance to shine. Which they take and the mock horror on Bayley’s face when another solo comes is lovely.

It is tremendously heartening as a fan of such long standing to hear Blaze do so many newer songs. “Life Goes On” and “Infinite Entanglement” are wonderfully epic, and if that one closes the set, it doesn’t really.

With the words “you can imagine we’ve left the stage and we can imagine you cheering” the encore begins.

“The Man Who Would Not Die” feels like his anthem, and “Man On The Edge” stands as his Maiden legacy I suppose, before the speech about “taking your future into your own ….etc etc”. The next line, though, is crucial: “and make that futureral”

The Maiden song gallops too. It really does.

There’s such a feeling of warmth as they take their bows. A feeling that yes, the days of arenas are gone, but that only means a bigger connection. There is something special which happens when Blaze Bayley gets onstage in front of his people. It always does, but when he’s on top form like this, its truly remarkable.