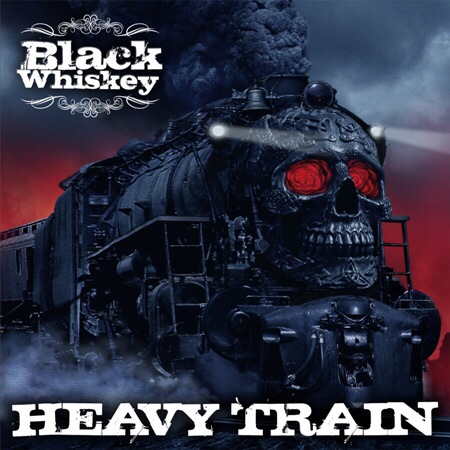 In the preamble surrounding Black Whiskey, much of the press interest centred around singer Simon Gordon being at one time the vocalist in seminal thrash band Xentrix, but this group, put together a year or back and also including Kev Ingles on guitar, Mark T. Parkin on bass and Rich Bannister on drums, contained men that played just about every style of rock music there was over the years. Then they started jamming on the songs that were eventually to become “Heavy Train” and found the common ground was Classic Rock.

When MVM saw the band live the other week on the release tour for this record, we were taken aback by how polished the show was, and just how well-crafted the songs were. On record that is even more the truth.

The band aren’t lying either. This is classic rock in every sense. “Heavy Train,” by turns sounds like Free and Bad Company at their best, there’s a touch of Whitesnake and on occasion there’s all the swagger of an early Aerosmith record.

Such praise is well deserved too, as from the, urmmmm departure of “Idol Rich” it’s clear that “…Train” is not only the record Black Whiskey wanted to make, it is one they can be very proud of.

“All Seeing Eye” comes on a little like Kiss’ “Love Gun,” and “The Devil Ride’s” positively swaggers. “Hungry For Bullets” has a dirty crunch, and let’s be honest, some dirty lyrics to go with it, and these are just a few of the superior cuts on offer.

Such a record needs a ballad, it gets one, in the shape of “The Coming Storm” which is elevated on the back of a wonderful guitar sound from Ingles.

Even amongst all this, the title track really takes the eye, everything that this type of song needs is contained here, and before the end the bass led groove of “Tie It Down” is at odds with the dark lyrical content on view and closing track “Can’t Kill The Fire” appropriately burns hot.

Classic rock is undergoing something of a revival at the moment, with “Heavy Train” Black Whiskey have put themselves right in the mix amongst the very best. An intoxicating brew.