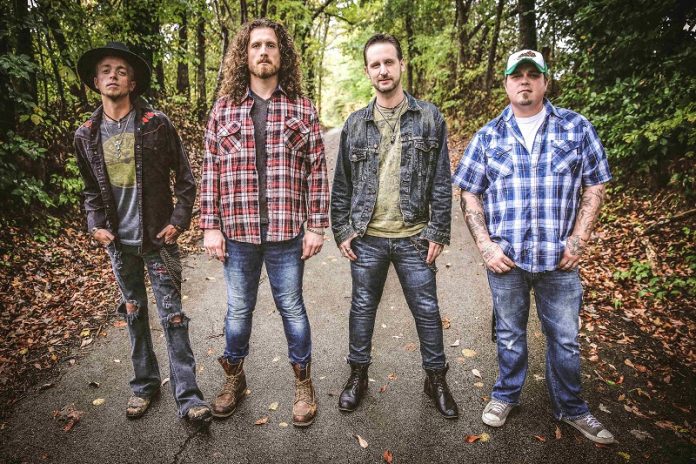 Brand new video in advance of new album
BLACK STONE CHERRY have released a new track, ‘Soul Machine’ from their hotly anticipated fifth studio album, ‘Kentucky’, set for release Friday 1st April via the Mascot Label Group.
Recording the album outside the confines of record label influence, the boys of BLACK STONE CHERRY were in a position to make the record exactly how they wanted, with no compromise and no exterior pressure to conform to a certain agenda.  Guitarist Ben Wells says, “What’s cool about this album is that we got to do some things we haven’t done before, but that we’ve wanted to do before.”  So the band brought in two backing vocalists, Sandra and Toynnia Dye, and horn players, Jonas Butler and Ryan Stiles to add their unique colour to ‘Soul Machine’.
BLACK STONE CHERRY frontman/guitarist Chris Robertson elaborates; “It was cool to try a couple of new things. They add a real element, they’re not really at the forefront, but we were able to do that without being told “oh, that’s not gonna sell” or “that’s not gonna work right”.  But since we were doing this on our own and we produced the record ourselves, we kinda got to do it the way we wanted to.”
The southern rockers crafted the ‘Kentucky’ album (named after their home state) at Barrick Recording, the same ‘local’ studio where they recorded their eponymous debut over 8 years ago.  The whole vibe and nature of the songs, steeped in the band’s hometown roots, meant that the collection could have no more fitting a name.
If you pre-order your copy of ‘Kentucky’ now at iTunes http://smarturl.it/BSC-iTunes you receive ‘Soul Machine’ instantly, as well as album tracks, ‘The Way of The Future’, ‘The Rambler’ and ‘In Our Dreams’.  Pre-orders for physical CDs and special vinyl packages are available over at http://smarturl.it/BSC-Kentucky.