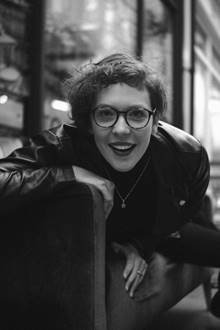 On 20th May, award-nominated ‘folk-grunge’ singer-songwriter Jessie Dipper will self-releaseher new single ‘Where Do I Go’, taken from her forthcoming new album Sticky Floors.

Currently based in Cardiff, Jessie Dipper has successfully self-released five singles, two EPs and an album over the last five years, continuously honing her brand of folk-grunge – a fusion that pulls from the 23 year-old’s love of Stevie Wonder, John Mayer, Mary Mary and Jimi Hendrix alongside Ed Sheeran, Mumford and Sons, Passenger and Lily Allen.

Written on the back of an envelope given to her by her Dad whilst sitting with “one leg down” due to being on crutches after rupturing her ankle ligaments, ‘Where Do I Go’ didn’t start out as an obvious choice for a single.

Jessie said, “In all honesty, I hated this song! I didn’t think it would go anywhere, but it was just one of those songs that I needed to get out to ease my frustration of not being able to do anything I wanted or needed to do. And it suddenly dawned on me that this was something that could voice not just my frustration, but that of so many of my generation.”

The single’s accompanying video (https://youtu.be/hJpFm0G7bgg) features a frustrated dinosaur who struggles to understand the restrictions of everyday life, such as ordering coffee or getting out of the bath. ““The dinosaur concept felt like a great way to communicate a harsh and real topic in a memorable and comedic fashion, whilst perfectly summing up the irritation I was experiencing,” says Jessie. “And it’s safe to say I now like this song!”

The seeds for Jessie’s musical exploration were sown while growing up overseas, witnessing first-hand the pattern that music paints across culture and the freedom it brings to seemingly voiceless people. In addition, Jessie has worked within communities as a songwriter/storyteller in countries such as Uganda, Nigeria, Sri Lanka, Romania, The Netherlands, Belgium and the Middle East.

With authenticity and honesty at the heart of Jessie’s music, she says, “A defining feature of my music is that it is rooted from a place of grief from premature deaths of family and friends, as well as a nagging sense of homelessness due to consistently moving throughout my upbringing.”

Continuing Jessie’s exploration as a solo artist, she spent two months performing tour dates in Australia and New Zealand at the end of 2018. But more recently, via Tileyard Music (the world’s largest community of independent artists and businesses), Jessie participated in an international songwriting camp in Marrakech, where she co-wrote alongside some of the best the songwriters the UK independent music scene has to offer. This led to a co-write with SONY Publishing for a collaboration to feature on Love Island USA.

Back in the UK, Jessie has been a featured artist on BBC introducing and received recognition from the Birmingham Music Awards and Open Mic UK as an artist who passionately wants to communicate not just a message of hope but the joy that comes from the struggle.

In addition to the release of her forthcoming single and new album, Jessie will end the year as main support for Scouting For Girls at the following UK tour dates: