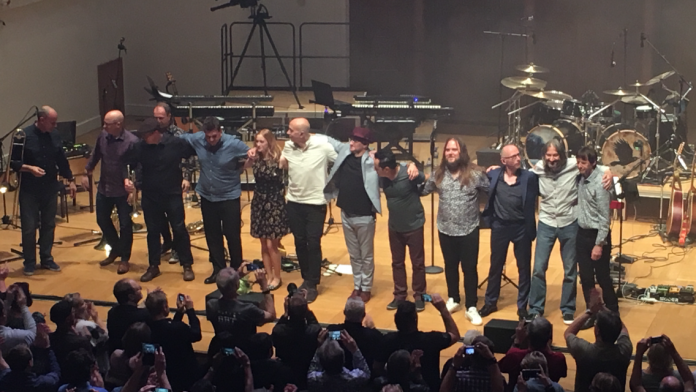 It’s been two years since the triumphant run of gigs at Kings Place and Big Big Train make a welcome return to the live arena for a set of eagerly awaited shows…..and it’s fair to say the excitement had reached fever pitch.

Assembling a set list when you are promoting a new album is always a tricky time for a band…..how about trying to doing that when you’ve released three new albums in just over twelve months…..that was the unenviable task facing the BBT members.

The show began in spectacular fashion with Violinist Rachel Hall opening proceedings with some stunning solo work, then it was the turn of the brass section to appear and the scene was set……’FOLKLORE’……the rest of the band entered the stage to rapturous applause, this was certainly going to be something very very special.

The show was split into two halves and I must say the way the band compiled the set list to perfectly blend the new & old is a credit to them, new tunes like ‘Brave Captain’ & ‘A Mead Hall In Winter’ are instant classics when heard on album…..but in the live arena these wonderful songs are raised to a whole other level.

Tracks like ‘London Plane’ & ‘Transit Of Venus….’ are now three albums old but to us in the audience they are still relatively brand new and it’s our first chance to savour these stunning pieces of work and savour them we did, the inclusion of tracks such as ‘Swan Hunter’ & ‘Last Train’, real fan faves were always going to go down well…..I’d be hard pushed to find a track from the bands back catalogue that wouldn’t have been received with enthusiastic applause to be honest.

Songs such as ‘Judas Unrepentant’ & ‘East Coast Racer’ find their worthy way into the setlist once more, I think these are songs that might just become staple features in the BBT live catalogue for many tours to come, although there are many equally wonderful tracks vying for position next time around.

Anyone who listens to my radio shows or knows me is very familiar with my utter adoration for the track ‘Telling The Bees’……it’s a stunning piece of work that leaves me with goosebumps each time I hear it and Saturday’s performance I’m happy to say actually drew a tear or two, we’ve all been there at gigs when our favourite track doesn’t quite deliver when performed live…..this was definitely not the case, the guys actually to coin a phrase from Nigel Tufnell took it all the way to ‘Eleven’ and a fair way beyond.

The breathtaking Victorian Brickwork closed the main set to an incredible standing ovation from the packed auditorium and quite rightly so….what we had just witnessed was very special and was well worth the twelve month wait since the announcement of these shows.

The encore of Wassail was preceded by a magnificent instrumental introduction which included a superb Nick D’Virgilio drum solo which just showed why he is classed as one of the finest sticksmen around, it was a perfect track to finish the show with frontman David Longdon donning the Wassail mask and conducting everyone to sing along until its conclusion.

It was an incredible show from a band who are loved by many, of course much of the talk afterwards, IMHO too much talk was along the lines of ‘Whens the next set of UK dates?’ without even taking time to allow what we’d just witnessed to sink in.

Big Big Train are a very special, very talented band filled with some of the nicest people I’ve encountered in the music industry, we need to celebrate these events and savour them rather than wish our lives away…..the next set of events will happen when they happen, and I for one will be there to enjoy it as much as I did this one and the Kings Place In 2015.