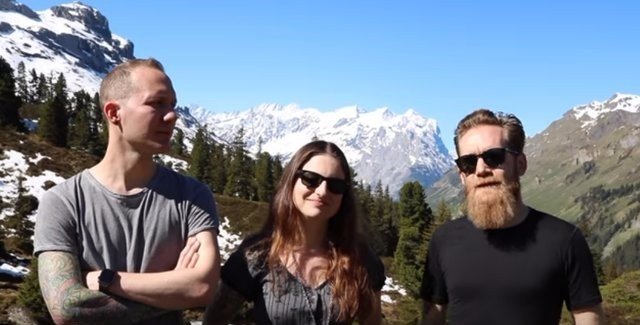 CELLAR DARLING, the much-hyped new band formed by ex-ELUVEITIE members Anna Murphy, Merlin Sutter and Ivo Henzi, have released the third album This Is The Sound, out on June 30th.

In this new clip, the three musicians discuss the differences between their fresh project CELLAR DARLING and their ex-band ELUVEITIE that they split with in 2016. Watch the clip, shot in the beautiful scenery of the Swiss mountains here:

After their split with ELUVEITIE, Anna Murphy, Ivo Henzi and Merlin Sutter quickly realised their musical journey was far from over. What quickly developed was a unique and fresh combination of grand and heavy riffs, powerful drumming and a unique voice along with the signature folky, earthy tones of the hurdy gurdy. This, combined with classical elements as well as inherited folk influences, led to the creation of something entirely new, setting Cellar Darling on the path of musical innovation.
CELLAR DARLING released their first single, ‘Challenge‘, and a bonus song called ‘Fire, Wind & Earth‘ in September 2016. Watch the lyric videos here:
https://youtu.be/5DRkXJCRM64 |  https://youtu.be/HOaR7k506s8