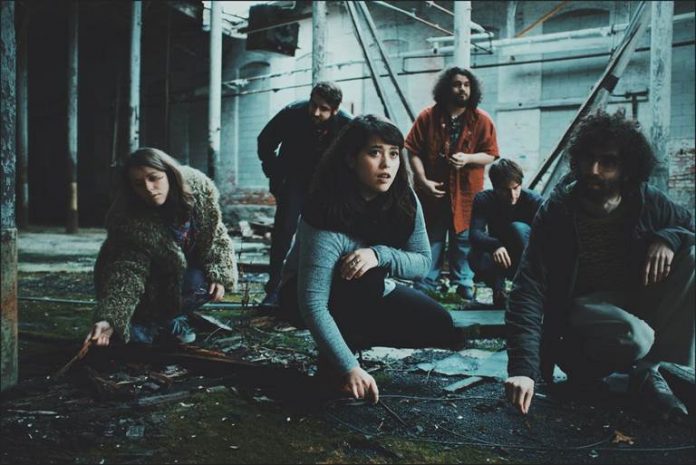 Following the release of their acclaimed album ‘Land Animal’ and US/European tours, the group was selected by Judd Greenstein (New Amsterdam Records) and jointly commissioned by NYC’s Ecstatic Music Festival & Celebrity Series of Boston’s Stave Sessions to compose a new work for the band and percussion ensemble. Bent Knee teamed up with Samuel Solomon and the Boston Conservatory Percussion Ensemble to create what would be the group’s first-ever collaborative composition of this kind. The final result is a mesmerizing six-movement, 30-minute journey that explores how memory continuously alters our present. The piece premiered live at the Apples & Olives Festival in Zurich in March 2018, followed by performances at Celebrity Series’ Stave Sessions in Boston the Ecstatic Music Festival in New York.

Bent Knee continues to tour extensively supporting the release of Land Animal and have embarked on a summer run across the US, performing favourites from their catalogue and previewing new material. See full routing at bentkneemusic.com/tour

Bent Knee formed in Boston in 2009 as a democratic collective determined to push the boundaries of pop and rock, combing myriad influences into a seamless, thrilling whole. Lead singer and keyboardist Courtney Swain’s soaring vocals are instantly arresting. Guitarist Ben Levin is one of the most dynamic and versatile guitarists around, shifting between the raging and raucous to the sublime and meditative. Bassist Jessica Kion and drummer Gavin Wallace-Ailsworth combine into an enthralling rhythm section that’s equal parts powerhouse and nuance. Chris Baum’s kinetic violin work provides drama, grace and intrigue. World-class producer and live sound designer Vince Welch weaves it all together with a captivating, expert touch. Fiercely innovative, the group bridges the gap between the experimental and the familiar, merging texture and style into music that’s moving, addictive, and unapologetically original. The band has gone from strength to strength in recent years. Their last three albums, 2017’s Land Animal, 2016’s Say So and 2014’s Shiny Eyed Babies, were hailed as significant art-rock achievements, and the band continues to be garnished with praise for their live show, performing hundreds of concerts worldwide to date.