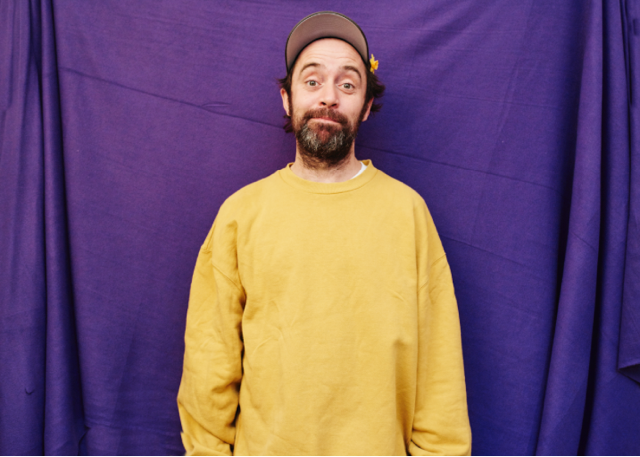 Set for release on the 1st December 2017, via standard bearers and long time companions XTRA MILE RECORDINGS, the latest record finds him within a hair’s breadth of reaching a monumental double-digit milestone of studio album releases.
Marking the announcement, Beans also offers us a glimpse into his latest long player with brand-new teaser track: TAYLOR SWIFT.
Available as a free download with all pre-orders of the ‘Cushty’ album – the track is also available to stream on Spotify here:
‘Taylor Swift’ embed link here:
Ever the protester and provocateur at heart, Beans on Toast’s ninth record doesn’t waste anytime getting down to business: “The world is dying…’ proclaims our favourite barefooted troubadour, ushering the listener into his latest album ‘Cushty’, with a statement that suggests things are anything but.
Our album entry point this time is OPEN DOOR POLICY, a soaring Beans-eye-view of the modern world that is both epic in scope and poetic in prose. Touching on Armageddon, Factory Farming, Big Data, Artificial Intelligence, Virtual Reality, computer compulsions and the future that may await us, the singer puts his perspective to all of these issues in a sweeping six-minutes of superlative song-craft.
An optimist. Pacifist. People’s champ. Loveable scamp. Raconteur. And drunk folk-star. Nearly a decade in the game, Beans on Toast has established himself as many different things to many a listening audience. And as our first introduction to ‘Cushty’ may suggest, Beans on Toast is as bristling with ideas and identity as he’s ever been.
Progressing from the more digitised approach of previous album ‘A Spanner in the Works’, new album ‘Cushty’ sees Beans instead surround his words with the comforting feel that can only come from a full live band.
Rounding up an array of incredible musicians and close compadres – Max Thomas (Skinny Lister) on Accordion, Matt Millership (Jim Jones and The Righteous Mind) on Piano, Jenna Mahone (Lord of the Dance) on Fiddle and of course long time musical partner Bobby Banjo plus top dog producer Tristan Ivemy (Frank Turner / Skinny Lister / Will Valley), the perfect team was quickly assembled for the next chapter in the Beans on Toast story.
Decamping to the homely settings of Giant Wafer Studios, a residential studio in the heart of the Welsh countryside (that conveniently in-keeping with gang’s ethical compass solely runs on renewable sources), the band recorded what would become ‘Cushty’. She Drew The Gun’s Louisa Roach even dropped-by for sumptuously soulful duet – THAT’S WHY I CAME TO OKEECHOBEE.
Heaped with all the ingredients that have made him as much the national treasure as his namesake, ‘Cushty’ is without doubt Beans on Toast’s most accomplished album to date and all recorded within just one week.
Glowing with his winning optimistic outlook, JAMIE & LILLY is a ballad about a teacher and a nurse that Beans met on the road that celebrates the beauty of the everyday, a sentiment also echoed by THE A303, a song that finds romance in one of England’s finest roads.
Plus there’s protest songs aplenty: MAJOR OAK stands tall with the trees of Sherwood Forest against fracking, whereas THE IGNORANT ENGLISHMAN sees Beans address his views on the UK’s departure from the European Union but also express his new found love for German culture following his recent tour there.
But of course, as with every Beans On Toast record there’s plenty of room for fun too. TAYLOR SWIFT is a boogie-woogie drinking song with lyrics you’ll find hard to shake off on your next trip to the pub; THE UNLIKELY GYMNAST finds our folk hero feeling flexible after a drunken promise; and SGP is a celebratory ode to the Secret Garden Party, a track written on request by the much loved UK Festival before they bowed out in style with their last ever event this year.
Beyond the gates of Secret Garden Party, Beans on Toast continues to pack out tents at festivals all over the world. After sticking to his guns and speaking his mind for so long, Beans on Toast has become something of a cultural icon for many. Still writing, still singing, still smiling and still telling it like it is. Completely original, brutally honest and refreshingly down to earth. Constantly touring, from playing in small towns and local pubs to big cities and legendary stages  – Beans on Toast is a one of a kind with a live show that has become a must-see fixture of the global gig circuit.
This autumn, complete with the full backing of the band who bunkered up with him in Giant Wafer Studios earlier this year, Beans on Toast will be hitting the road once more for a 15-date ‘Double Trouble’ UK tour. Every night, Beans will go to head to head with his Xtra Mile label mates SKINNY LISTER for these double billing shows throughout November and December.
Catch Beans at the following dates:
NOVEMBER
21 Leeds, UK – Stylus
22 Manchester, UK – O2 The Ritz
23 Glasgow, UK – Oran Mor
24 Newcastle Upon Tyne, UK – Newcastle University
25 Sheffield, UK – The Leadmill
28 Birmingham, UK – Glee Club
29 Nottingham, UK – Rescue Rooms
30 Norwich, UK – Waterfront
DECEMBER
01 Cambridge, UK – Junction
02 Leicester, UK – Dryden Street Social
06 Cardiff, UK – The Globe
07 Southampton, UK – 1865
08 Exeter, UK – The Phoenix
09 Bristol, UK – SWX Bristol
10 London, UK – Koko
‘CUSHTY’ – THE NEW ALBUM IS OUT 1ST DECEMBER 2017

Pre-Order ‘Cushty’ at the links as follows and receive track ‘Taylor Swift’ as a free download:

The full track-listing is:

8. SGP
9. The Unlikely Gymnast
10. I Think Everyone Should be Terrified
11. It’s A Funny Old World
12. That’s Why I Came to Okeechobee
13. The House That Austerity Built
14. The Sun The Moon And Me
FOR MORE INFORMATION