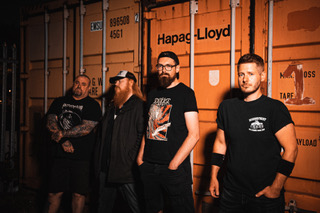 UK sludge metal juggernaut Battalions are set to return with their new album ‘King of a Dead World’ on 21st this Friday via APF Records (Video Nasties, Desert Storm, Corrupt Moral Altar). The follow up to 2018’s ‘Forever Marching Backwards’, this album is 8 tracks of colossal, towering, hook filled riffs, born out of a crumbling world.

‘Parasite is a short sharp chunkfest of a track with a couple of bits of Black Flag riffage thrown in for good measure. This is our now traditional song on the album about a movie, every album has one. This time out is a song about the off-world colony Hadley’s Hope and the discovery of the facehugger eggs’

Listen to the track now: https://youtu.be/Ap6j4DTw99k

“I was reading an article online about the decline of humanity, the battering of Earth’s resources, the financial and human cost of war, global warming etc, and how the world’s leaders are partly to blame. The article ended with “who wants to be the king of a dead world?”. I read that and it was a light bulb moment, I thought that’s a great song/album title, everyone agreed and it stuck straight away”.

Starting out way back in 2010 in the depths of Kingston upon Hull, Battalions have gradually become veterans of the ever growing underground UK metal scene with their own brand of groove riddled sludge metal. At its the core this is harsh and heavy music, packed with razor sharp guttural vocals and yet it’s hard not to find yourself nodding along addictively to each track on this record.