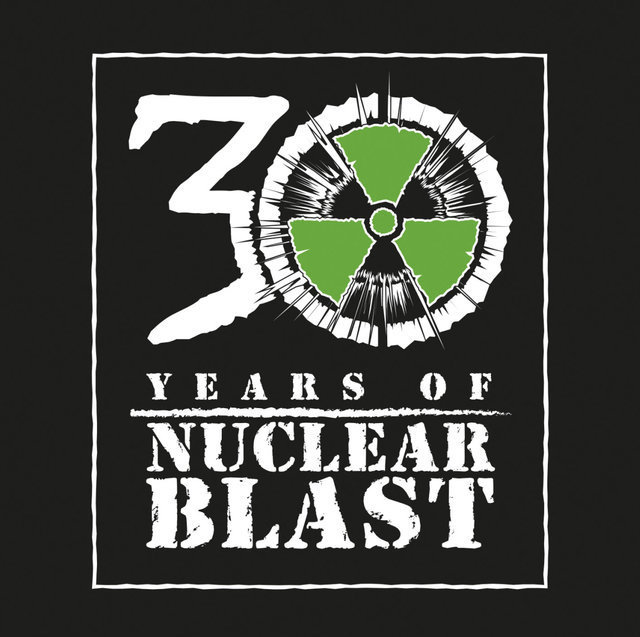 It’s time to celebrate! To coincide with the label’s 30th anniversary, Nuclear Blast have released 7 vinyl albumsin a premium box and a CD/DVD box set featuring classic cuts from NIGHTWISH, SABATON, DIMMU BORGIR, BLIND GUARDIAN, SLAYER, ACCEPT, KREATOR, AVANTASIA, PARADISE LOST, SEPULTURA, ENSLAVED, IN FLAMES, ANTHRAX, BLUES PILLS and many more. You will find timeless anthems, current neck breakers and epic hymns in this journey through 3 decades of the label’s history. Some of our bands are helping us celebrate by telling us about their favourite NB releases. Watch the video featuring some of these quotes, here:

Speaking about the label’s anniversary, ANTHRAX stalwart Scott Ian commented: “Nuclear Blast’s 30th! Wow. Thirty years of supporting this music through thick and thin. I’m proud to say that Anthrax and Nuclear Blast have been working together for almost eighteen years now. That’s by far the longest we have ever worked with any label. It’s rare in the music biz to have such a successful marriage, and much like with a real marriage, both partners have to remember why they got married in the first place. That initial spark that lit the flame that turned into a raging inferno. For me that initial spark was Markus Staiger’s love for metal – how big of a fan he was/is. That’s why I wanted to work with Nuclear Blast, because I believed Markus loved Anthrax. And all these years later he still does. Thank you to everyone that’s kicked ass for us over the last almost two decades and it’s an honor to be a part of this 30th anniversary celebration.”

Speaking about their favourite NB releases:

“Behemoth, gave a new slant on the death / black metal scene, a very convincing heavy album and probably the first extreme album I’ve managed to listen to all the way through from start to finish in a very long time!” – Nick Holmes from PARADISE LOST discusses ‘The Satanist’ by BEHEMOTH

“My favourite Nuclear Blast release is “ObZen” by Meshuggah. Like those stars packing unbelievable amounts of matter compared to their size, this album just contains way too much raw, masculine energy compared to what should be possible just in “music”. Also fascinating is the constructive nature of the music on this album (masculine energy tends to be that); this is music for building and preserving. While screaming your lungs out, that is. The piece de resistance itself is “Bleed”; a song that needs to go down in music history as the definition of “powerful music”. They say using music with your workout increases intensity by 15%, but then you haven’t tried with “Bleed” blasting, have you? I’d say 115% easily. A dangerous album in the wrong hands. I love it!” – Ivar Bjørnson, ENSLAVED

“Kreator have always been one of my favourite bands, the real deal, period. Not to mention my German cousins. Phantom Anitchrist, released in 2012 forged not only the past with the present but that of what would come. I am UNITED IN HATE!” – Bobby ‘Blitz’ Ellsworth, OVERKILL

“I really like the Sylosis album Monolith, which came out a few years ago. It has such wonderful dark atmospheres in the slower sections in contrast to the power that follows. Not a bad guitar player either. Now I am looking forward to hearing Nuclear Blast albums for the mighty My Dying Bride too in that kind of style!” – Karl Groom, THRESHOLD

“We met Peter Tätgtren the first time on a German festival and he convinced us with his euphoric enthusiasm to produce our comeback album ‘All Hell Breaks Lose” in 1999/2000. Since then we became close friends and I became a big fan of his work. THE ARRIVAL is the best sounding HYPOCRISY records for me as a musician. I know many fans love the older and more raw albums but this one sounds as massive as a steamroller. It is a role model and shows that Death Metal can also sound brutal when it is nicely produced. Also the song ERASER is a Death Metal Anthem ‘par excellence’ – for me one of the best and  the most catchy songs Peter has ever written for HYPO. I also remember well how excited he was when the album was mixed, like a little kid in the candy store. This excitement is an important part of success – it was a big step forward for him as a producer and songwriter. Out of all Swedish Death Metal this is still my favourite record till now!” – Schmier, DESTRUCTION & PÄNZER

“Well since it’s obviously not the easiest of all things picking a favourite out of all Nuclear Blast releases, but ‘The Living Infinite’ became an instant personal classic for me from the day i picked it up. I’m a big fan of swedish melo dm bands in general but the diversity of this mean beast holds a special place for me. Of course it has the super fast and punchy stuff on it but at the same time there’s this melancholic feel to the songs that holds it all together so well, being a double album. Just listen to the opener and closing track from disc one. It’s typical for the genre of course but they forge those elements together so well here and haunt you with those melodies that you can’t get out of your head. And then when you think you know the deal they jump at you with an almost rock n rollish riff like in ‘Long Live the Misanthrope’, it’s so cool! I just rediscovered it lately and it hasn’t lost on bit of intensity!” – Jonas Wolf, ELUVEITIE

“I would have to pick one of your old school releases, Dismember’s “Like an Ever flowing Stream”.  A great album that truly represented the early Swedish Death Metal scene.  Dismember was a band that we were in touch with in the late 1980’s.  I was pen pals with Fred Estby back then, so we were trading Immolation demos and shirts for Dismember ‘s demos and shirts.  We were huge fans and friends and actually got to meet them back in those early demo days when we visited Sweden back in 1989.” – Ross Dolan, IMMOLATION

“One of my favourites NB releases is the Death album The Sound of Perseverance. It’s the last Death album and is the best work from Chuck Schuldiner as a composer, the guitar work is phenomenal and to this day it sounds very actual, very modern. It is an album that showed a new exciting way to heavy music, truly a classic.” – Andreas Kisser, SEPULTURA

“There really is no doubt that Soilwork’s ‘Stabbing the Drama’ has become the most important Nuclear Blast release to me. That album basically gave me the taste for the heavy metal genre and the albums that followed ended up being one of my biggest musical influences to this day. Being an actual member of this band 12 years after is beyond anything I ever imagined and an accomplishment that I’m truly proud of.  I’m still amazed by the level of musical content that Nuclear Blast puts out.” – Bastian Thusgaard, SOILWORK

“It’s hard to choose your favourite NB release over the last 30 years but mine would have to be Dark Passion Play by Nightwish – and it is a serious contender for my favourite album of all time. I cannot begin to explain the journey that this musical masterpiece takes me on at every listen. The power, the melody, the anger, the beauty, it just engages my every sense, pure genius. It was this album that got me into this amazing band and showed me just what I had been missing. So, thank you Nightwish for Dark Passion Play! And thank you Nuclear Blast for 30 years of amazing music!!” – Glynn Morgan, THRESHOLD