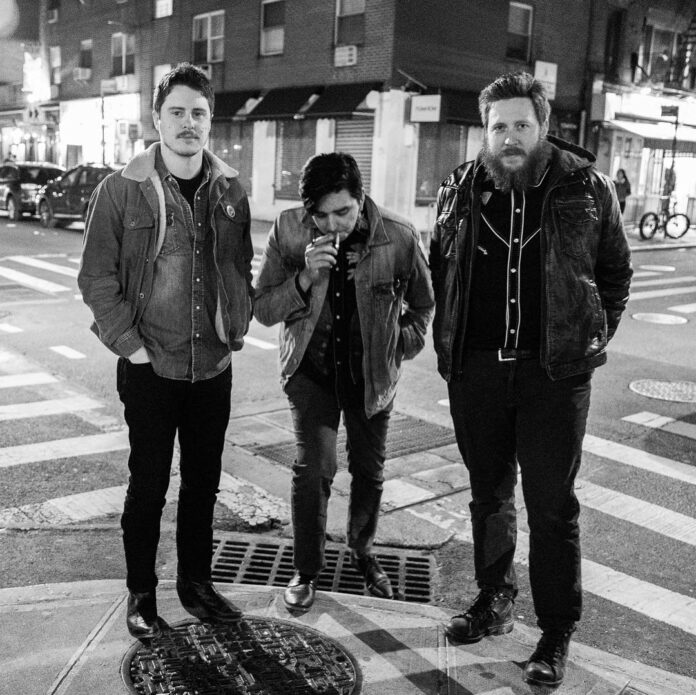 Get your dance moves ready, as New York garage psych rock revelers SUN VOYAGER take no prisoners on their frantic new video for “God Is Dead II”! Check it out below, and prepare for the trio’s new self-titled album on Ripple Music, to be released this October 7th.

“If you’re a connoisseur of the latest in fuzzed-out heavy music, Sun Voyager are a band that should have a place on your radar.” – Decibel Magazine

About the new single, they say: “A continuation of God is Dead. This song takes the doom-driven riffs of the original song into full throttle musically. Lyrically, it explores the harsh reality of accepting nihilism. How do we as humans cope with that philosophy when push comes to shove? In moments of crisis, death and tragedy, our beliefs are tested, and we find ourselves looking for an answer that we know doesn’t exist. To create a music video that captures the raw energy of the material, we partnered with the Mad Alchemy Liquid Light Show and shot the performance in an abandoned bank.” It was edited by Taylor Del Villar and the Liquid Light Show was filmed and Produced by Lance Gordon (Mad Alchemy Liquid Light Show).
►►► Listen to the first single “Some Strange” at this location

Formed in 2014 and propelled by their split album with Greasy Hearts, SUN VOYAGER is a heavy psychedelic rock powerhouse from New York that fuses early metal influences from the comedown era with kraut jam-inspired stoner rock freakouts. Their self-titled Ripple Music debut is seven tracks of just that. For fans of Kyuss desert grooves, expansive heavy psych of King Gizzard or Thee Oh Sees, and Earthless wah explorations.

After the release of their 2018 self-titled debut, SUN VOYAGER toured a lot and started experimenting and refining their jamming facet on stage, freaking out more, grooving out more, while finding a whole new level to their sound. Rehearsals then turn into 2-hour jams and the sound of their new album ‘Sun Voyager” stems a lot from that experimentation. A mellow groove in the vein of Dead Meadow or Spacemen 3 will sometimes take off into full-blown ACDC or slowly build as Earthless would, while a heavy swing that feels like the Allman Brothers will end up sounding like Red Fang (and vice versa). If their jams aren’t totally ripping your face off with fuzz, they will blow your minds through their indecent amount of reverb or wah. The trio just signed to San Remo-based powerhouse Ripple Music for the release of their sophomore album ‘Sun voyager’ in the fall of 2022.

Previous article
MOLD AND FLU
Next article
REVIEW: TYLER BRYANT AND THE SHAKEDOWN – SHAKE THE ROOTS (2022)