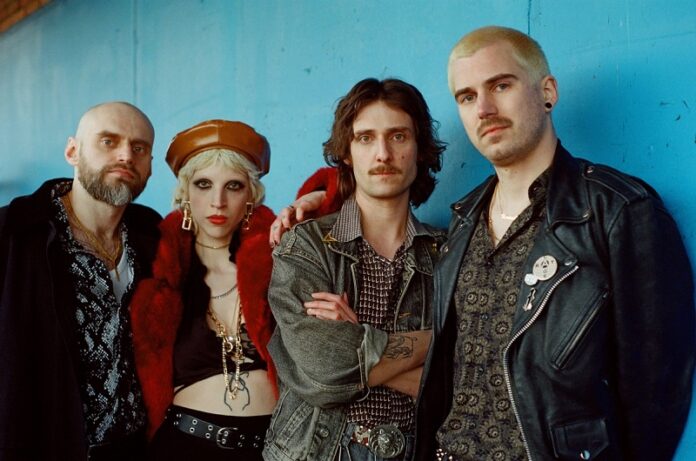 Hailing from Kassel in central Germany, punk act SUCK earned their stripes as a stellar live attraction when supporting Amyl and The Sniffers on tour in their home territory just prior to the pandemic. Having released an EP entitled ‘Frog’ before that set of dates, they are now finally ready to unleash their debut album, ‘Ribbit’.

‘Rat King’ is the third single to be teased ahead of the record. A diabolical homage that fuses hard punk and metal, a fuzz-soaked 70s proto-metal groove à la Black Sabbath ultimately wins out over its thrash elements via a main riff that sounds simultaneously casual and evil, plus a swampy, almost surf music-like vibe that pervades during the second half of the song.

A ‘rat king’, incidentally, is a collection of rats whose tails are intertwined and bound together in some way. This may be a result of an entangling material like hair, a sticky substance such as sap or gum, or their tails being tied together. Historically, this phenomenon is particularly associated with Germany and its earliest recorded report dates from the mid-16th century, although the term was not originally used in reference to actual rats, but for people who lived off others.

‘Ribbit’ opens with ‘Rip It’, which sports a drum intro that sounds like it’s about to kick your front door in, followed by an explosion of aggressive, circular saw guitars, bass growls and snarling vocals that don’t let up for the next half an hour. Previous singles ‘Gravedigger’ and ‘Lucifer’ have already shown that SUCK have evolved from similarly heavy tracks on their earlier EP, with the full album proving that the group haven’t simply gone down the classic punk route but also have a feel for the aggression and energy of other heavy music.

“Metallica and Sabbath are the intersection that we all agree on,” states guitarist Jakob Fast, “while the latter have influenced my guitar style. Even though the songs are more punk than metal, that’s where they come from.” Bassist Nils Köhnken adds that “I grew up with 90s and noughties punk like Bad Religion and NOFX. Metal then came into my life more out of necessity: there were no punk groups in my area that I could join, so I played in a death metal band.”

As evidenced by their name, music, vocals and song titles (others include ‘Copkiller’ and ‘Roadkill’), SUCK emanate a certain level of aggression, albeit while wearing a smile. According to drummer Patrick Pietsch, ‘Copkiller’ is ‘politically meant’ and has arisen from the “natural scepticism towards state power that most punks have.” Vocalist Isabell Rutz modestly claims that their song lyrics are “neither banal nor mega deep,” although ‘Rat King’ (as one example) has a certain demonic power that comes in part from its words, while ‘Decadent Life’ is successful because it relies on simple, powerful announcements. “I just wanna lose my shit tonight!” she sings in its chorus; quite honestly, isn’t that exactly what we’ve all missed in recent years?