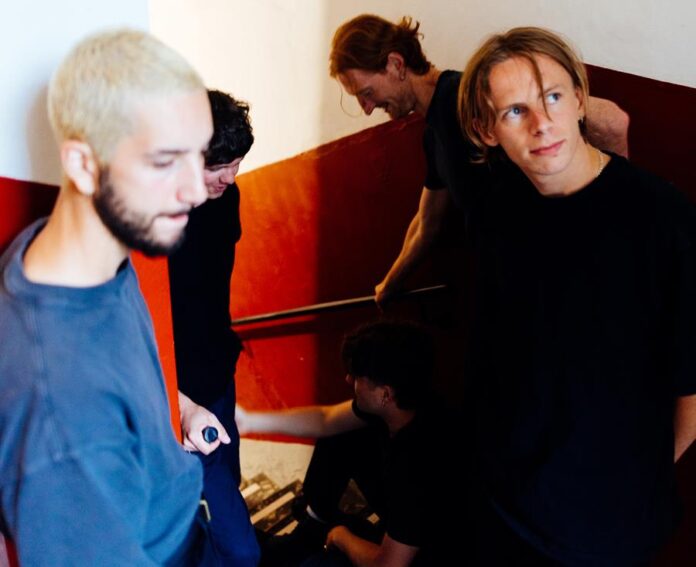 At the start of the summer So Young Records – whose recent releases have included Vlure, Been Stellar and Lime Garden among others – announced the signing of Humour, a Glaswegian group still in their relative infancy, but one who arrived musically fully-formed, pairing together fragments of off-kilter post-punk, erratic indie-pop and discordant post-hardcore, delivering a sound that is at once disorientating and immediate. Early shows in support of Do Nothing and Folly Group have already marked them out as a must see live band, propelled by the unhinged lyrical energy of front man Andreas Christodoulidis.

Today they announce their six-track debut EP, “Pure Misery”, set for release on November 25th. Available digitally and on limited edition 12″, you can pre-order the record direct from So Young here.

Alongside the EP announce, today they showcase the diversity in their songwriting with their second single, the incendiary “alive and well”. Propelled by gang vocals and ready made to be sung back at them on the live stage, the band’s frontman Andreas had the following to say about how the song came together:

“Alive and Well came together quite suddenly after a prolonged period of trying to make it work. Jack and Ross had written the bones of the song, and showed it to me with the music in a more or less complete form. They sent me a voice note in which they were muttering along to the music, saying things like “I was so confused, I couldn’t understand it. Everyone’s pissed off at me,” and I could hear laughing, and didn’t think they were that serious about those being the lyrics.

Jack then suggested that I scream the lyrics as loudly as I could, which sounded right for the song when I did. I wanted the vocal to sound like somebody drunk and feeling sorry for themselves. I then wrote the lyrics to the chorus, which are loosely about getting away from a place and a feeling, but sensing that you won’t ever manage to.”

Humour live together in Glasgow and formed across the 2021 lockdowns, writing and recording their material at home, with the music intended as a backdrop to Andreas’ lyrics. Sometimes they’re about letting people down, sometimes they’re about pets dying, sometimes they’re about trying to say something when you don’t have anything worth saying. They’re usually just trying to paint a picture, with Andreas drawing sketches to go along with each of their songs, including the EP cover, and the artwork and visuals behind the lyric videos for both “yeah, mud!” and “alive and well”.

They hope that each song looks the way that it sounds.

The band will play a number of dates in support of their debut EP, with more being added all the time: