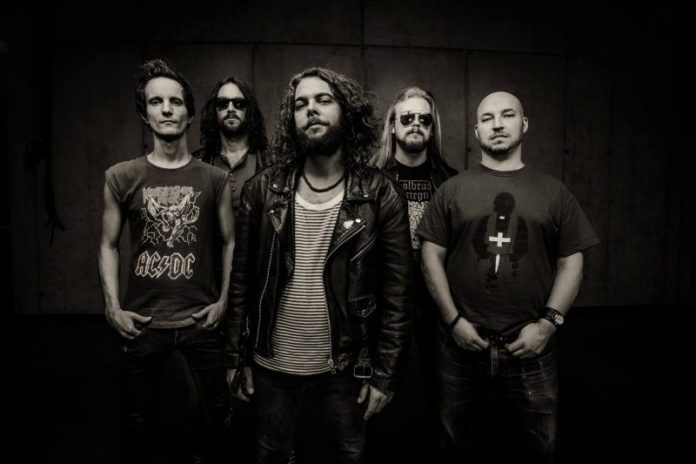 Fat&Holy Records would like to introduce you to Glanville, a brand new heavy metal band mostly from Darmstadt, Germany. That introduction comes by way of a video for the song God is Dead which features green screen technology! lights! a VHS camera! special effects! oh and the band. God is Dead dives, in a holy fashion, straight into twin lead guitar harmonies which immediately sets the tone for the rest of song; Heavy Metal.

Glanville was formed by childhood friends Philipp Michel (Jack Daniels) and René Hofmann (Marijuana) who wrote 5 great heavy metal songs and decided they needed to be played by a real band. Hofmann, who previously played guitar, had this to say about the experience:

“As an unsuccessful guitarist screaming and complaining all the time about my playing, I found out that my my tongue works better than my fingers so I became a singer. Finding the right musicians for the band was hard. It took over a year… like diggin’ in the bargain bin and only finding the leftover bruised apples”.

“Having grown up on a strict diet of Judas Priest, I just had to hop on board. But now my right hand constantly hurts.”

God is Dead is taken from the band’s upcoming ‘First Blood’ EP that is due to be released May 4th 1̶9̶8̶2̶ 2018 on Fat&Holy Records on CD, LP and digital. First Blood was recorded live in a Darmstadt studio with most members never having played together and some only meeting for the first time during the 2 days pre-production and rehearsing before recording.

The band play an EP launch gig at the Oetinger Villa in Darmstadt on April 14th. First Blood can be pre-ordered here: http://fatandholy.bigcartel.com/