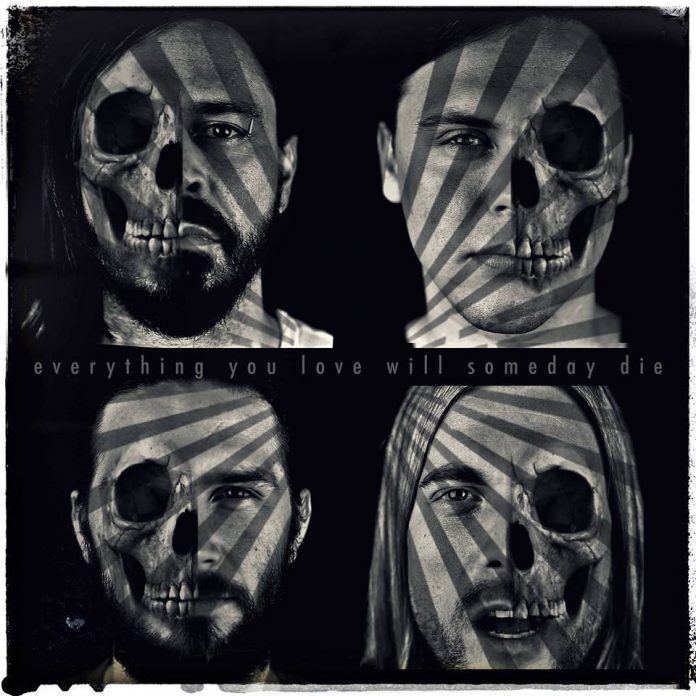 LA’s Cage 9 has released their new video, “Everything You Love Will Someday Die” the first single from their upcoming album ILLUMINATOR, out June 10th via EMP LABEL GROUP, the label founded by Megadeth bassist David Ellefson, distributed by eOne in North America, and SPV in Europe.

The video can be seen here:

The album is currently available for preorder from empmerch.com, and Itunes, with the single.

Cage9 main man Evan Rodaniche had this to say about the track. “This song is dedicated to my father, who passed away about a month ago after a two year battle with cancer. But even when I first wrote these lyrics at the onset of his terminal diagnosis as a sort of comforting mantra, in the back of my mind I believed my dad was indestructible. I never thought I’d be adding an “in loving memory” dedication at the end of this video. But then he was gone. And that’s what this is all about. We spend our modern lives wrapped up in our first world problems, completely disconnected with the natural cycles of the planet around us.”

He continues, “We shot the video DIY with a couple Canon DSLR cameras, a black sheet in
our rehearsal room and about forty non-actor friends, fans and family who showed up one sunny Los Angeles afternoon in 2015 to mouth the lyrics to a song they’d never heard. We aimed to bring home the message that no matter who you are, we’re all in this together.

“Everything You Love” is also the track that caught David Ellefson’s attention and ultimately inspired him to sign us to EMP. After a few conversations with our A&R guy Thom Hazaert, he brought it to David, and he got it. The rest is history.”

Says Ellefson, “Cage 9 is definitely the real deal. When I first heard “Everything You Love Will Someday Die”, it instantly struck me as the closest I’ve heard to a song with a true Metallica/Megadeth core, with the radio accessibility to really connect with a modern Rock audience. And with the band’s history, and everything they’ve accomplished, they were a perfect fit for what we are doing at EMP.”

Rodaniche continues, “As for the song, itself, it’s a little bit of old school thrash mixed with something more melodic and a little piano and acoustic guitar wankery to push it over the 6 minute
epic-metal-song mark. (Yes, there’s a radio edit.) I was the 14 year old kid running around with a worn out cassette of Peace Sells in his Walkman, so having the dude that brought us pretty much THE most recognizable bass riff of my, (and half the planet over 30’s) youth, dig our band is a HUGE honor.”

“Cage9 originated in Panama where I grew up playing in a band yet having pretty much never experienced famous bands performing live to learn from, not to mention any of our idols like Megadeth or Metallica. This definitely makes getting this chance to work with David in a mentor/label situation that much more amazing. Very excited to be releasing our new album Illuminator with EMP this summer.”

Eventually the band moved to Los Angeles, and with no outside help, has released almost 100 songs over 6 albums (including one in Spanish), sold 25,000 plus physical copies worldwide, toured the US (over 50 dates last year alone), Japan and Central America, as direct openers for Ozzy Osbourne, Bad Religion, Seether, In This Moment, and have also shared bills with Sevendust, Hellyeah, Karnivool and many more. Band mastermind Evan Rodaniche (who writes and produces all Cage9 material) also spent a few years on guitar with sci-fi metal purveyors Powerman 5000 and helped co-write, record, mix and produce their last few albums along with ex-Flyleaf singer Lacey Sturm’s new solo album, Boy Hits Car and more. The quartet now includes San Diego native Brian Sumwalt on
drums, Michigan transplant Matt Borowski on guitar, and Leslie Wyatt on bass and backing vocals.