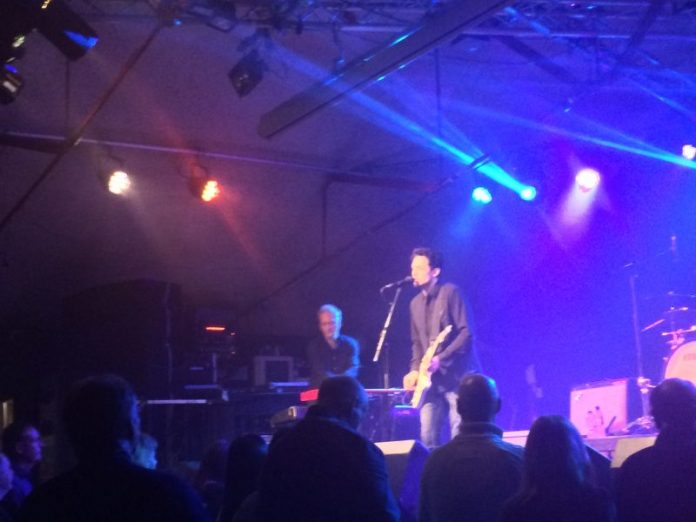 Blues but so much more

Invoking the “there’s no such thing as a bad three piece band” are Blackballed. The dapper Manc Trio (seriously they are better dressed – in top and bowler hats no less – than MV would be for a wedding!) deal in a more bluesy brand of hard rock than you might expect from Marshall Gill, once of New Model Army. But with his chunky riffs and brother Leon a real livewire on the kit, they have a winning formula. Older songs like “Coat Of Many Colours” and “Waiting For The Show” are just the right side of gritty, and there’s a new album due this spring (“it should be April, but we aren’t as organised as we look” grins Marshall). The title track and another cut called “Shoes” (possibly),  hint that it will be a step forward. A band that sees the fun in what they do – the drinks holder onstage suggests they know rock n roll isn’t too serious after all – and one who, as drummer Leon puts it when MV and he have a brief chat outside pre gig “sneaks in under the radar” could be ready to step out of the shadows.

It is, to be fair the only time he looks flustered all night. “Blimey,” says a genuinely bewildered looking Aynsley Lister. Allow us to explain.

He’s about half an hour into the near two hours he’s onstage and someone in the front row has requested he plays “Summer of 69”. Composure regained he does the intro, but stops before he needs to reveal whether or not he got his first real six string at the five and dime.

Understable really, given that he’s got a brilliant new album of his own under his belt. “Eyes Wide Open” emerged in the Autumn of last year and there’s a good smattering of it played here. “All Of Your Love” – as it does on the record performs opening duties, there is a real sense of fun too in the dark jazz of “Il Grande Mafiso” and “Stay” is a real straight ahead rocker.

Another of the new songs, “Other Part Of Me” gives the Aynsley Lister Band the chance to showcase their incredible talents. Surely one of the most accomplished quartets there is, Andy Price’s organ work here is stunning, as is Steve Amadeo’s bass playing and Boneto Dryden keeps the whole thing locked down with his “brand new shiny” kit (making it’s debut tonight).

One of those bands that has that almost telepathic understanding, able to do it on a nod or a look, frequently they look to be improvising. Nowhere is this skill more evident than when they are joined on stage by Laurence Jones and the young local (ish) guitarist fits in perfectly on Derek and the Dominos’ “Tell The Truth” and Freddie King’s classic “I’m Tore Down”.

In amongst all this jamming and new material, the older work isn’t neglected, “Early Morning Dew” the absolute pick of the back catalogue and after “Purple Rain” – a song so perfect that you wonder why more blues players don’t do it – gives way to the encore, it is the darkly superb “Possession” that concludes things.

This really was a triumphant show.  There is an unspoken confidence about Aynsley Lister at the moment. The body language when he walked on with no fanfare told you as much. Where some bands like to ask if you wanted the best and tell you that got it, the Aynsley Lister Band don’t need to. The music makes it obvious.