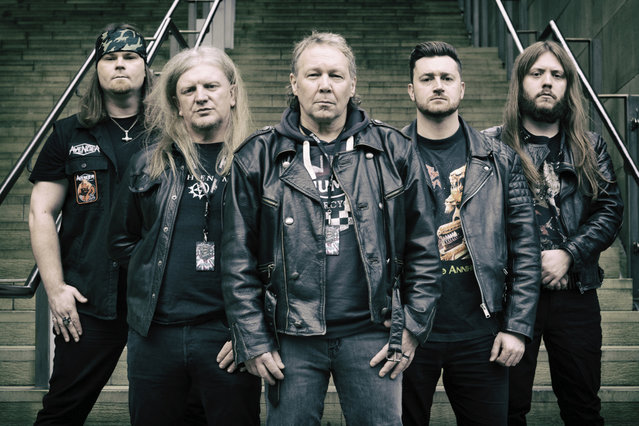 Not a random stab at a description, but an archive of metal styles the band have molded themselves to and related to since their NWOBHM founding over three decades ago, by three members of the cult band BLITZKRIEG.

During this time, AVENGER honed their playing skills and built up a worldwide fan base, enjoying rapturous receptions at festivals and concerts from the Eastern seaboard of America, to the metal hungry fanatics of Europe and down to the tropics of Latin America. From the word go, AVENGER always had this mission statement: get out and put on as intense and as professional show as possible.

No wonder that AVENGER became one of the most respected British heavy metal bands, and that both of their albums released back in the day – “Blood Sports” from 1984, and “Killer Elite” from 1985, have a legendary status today, and are demanded by new generations of headbangers.

Thanks to Dissonance Productions and Back On Black Records, both classics will be available on both CD and LP format – and it’s safe to say, that these will be the “ultimate editions”. The albums got dynamic mastering by Bart Gabriel (who recently mastered reissues of bands such as CIRITH UNGOL, SORTILEGE, and the new PAGAN ALTAR and CRYSTAL VIPER albums), both of them include previously unreleased bonus tracks, and include previously unseen photos from band’s archives. But that’s not all: stay tuned, as AVENGER haven’t said their last word yet. They are too wild to tame!