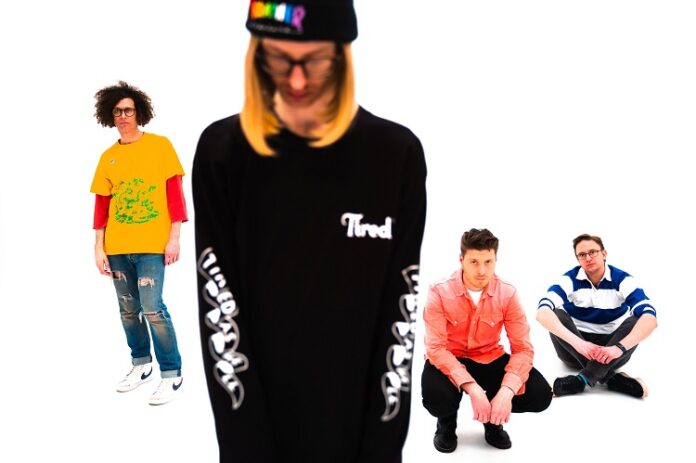 STREAM ON ALL SERVICES HERE || WATCH THE LYRIC VIDEO HERE

“Crypto Klepto” is the sound of confusion and technological disorientation, borrowing musical bits from Beastie Boys, Bad Brains and Public Image Ltd then refracting them through the mind of Philip K Dick at his most dystopian. It’s the sound of the Web2 and Web3 paradigm shift reorganised using the William Burroughs cut-up technique.Asylums have been quietly building an impressive back catalogue of albums since the release of their debut
‘Killer Brain Waves’ in 2016. With three full studio albums and a stand-alone single behind them, as well as countless collaborative projects and soundtrack work, Asylums are soon to announce their fourth album.
Alongside their work as a band, Asylums have helped to nurture a roster of equally creative individuals with their
Cool Thing Records label team – putting out amazing records by the likes of BLAB, A Cause In Distress and many more, whilst still finding time to run a bi-weekly arts advocacy radio show called ‘Cool Thing Presents’ which airs in London and New York on the Culture channel of Soho Radio.
“Crypto Klepto” was recorded in the same room as “Bohemian Rhapsody” at the legendary Rockfield Studios in Wales by none other than Dave Eringa, the man responsible for Producing last year’s No 1 album ‘Ultra Vivid Lament’ by Manic Street Preachers.

“I can honestly say this is one of the most unhinged songs I’ve ever produced & up above 215bpm one of the fastest too!! At that speed it’s genuinely difficult to get it this heavy but the booming tom overdubs & the phalanx of fuzz guitars that annex the second verse get us there I think and the “Lalala” backing vocals notch the crazy up a level too!! Wild punk rock insanity!!!! Love it!”

Asylums are back from the brink in more ways than one, and after months of isolation and despair “Crypto Klepto” kicks the bedroom door off its hinges and urges you to head straight towards the nearest rock show.

“CRYPTO KLEPTO” BY ASYLUMS
IS OUT NOW ON SOUTHEND ON SEA BASED LABEL COOL THING RECORDS.
LISTEN HERE: HTTPS://FFM.BIO/ASYLUMS