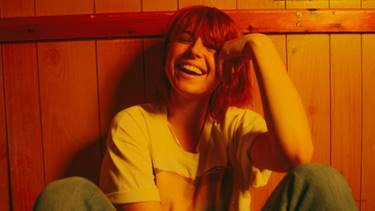 BAFTA Rising star nominee Jessie Buckley, one of the fastest rising actors in cinema, looks set to take the music world by storm as the star and voice of the gritty, inspirational and heart-warming film WILD ROSE. Written by legendary country star Emmylou Harris, “Born To Run” is the second song to be lifted from the “Wild Rose” OST (April 12). The accompanying video finds Jessie in her element performing this anthemic song which is central to the film’s narrative.

“Born To Run” soundtracks a key moment in the film and is performed by Buckley with passion, verve and genuine vocal prowess. Adding a new string to her bow Jessie got so involved in the music and the process that she ended up writing six of the album’s songs with the film’s Bafta winning writer Nicole Taylor and has since performed the songs live. The Original Soundtrack will be released on Island Records on April 12th, the same day the film hits the screens in the UK.

Starring alongside Julie Walters and Sophie Okonedo, the Irish born Buckley plays Rose-Lynn Harlan, a single mother of two, fresh out of prison, bursting with raw talent, charisma and cheek. Her dream is to leave Glasgow for Nashville to make it as a country star. Her mum, Marion (Julie Walters), has had a bellyful of her nonsense. Forced to take responsibility, Rose-Lynn gets a cleaning job, only to find an unlikely champion in the middle-class lady of the house, Susannah (Sophie Okonedo). Directed by BAFTA nominee Tom Harper (The Scouting Book For Boys), produced by BAFTA nominee Faye Ward (Stan & Ollie) and written by BAFTA award-winning writer Nicole Taylor (Three Girls, The C Word), WILD ROSE is an uplifting story with an original soundtrack about family, dreams and reality – or as succinctly put throughout the film, “three chords and the truth.”

This April she will be seen in the HBO / Channel 4 series “CHERNOBYL” alongside Emily Watson. In 2018 Jessie had her first lead role in Michael Pearce’s critically acclaimed film “BEAST”, co-starring with Johnny Flynn. The film opened to rave reviews and Jessie won the most promising newcomer award at the British Independent Film Awards.

2019 promises to be a very busy year for Buckley with co-starring roles alongside Renee Zellweger in Judy garland biopic “Judy” and “The Voyage Of Doctor Doolittle” alongside Robert Downey Jr.