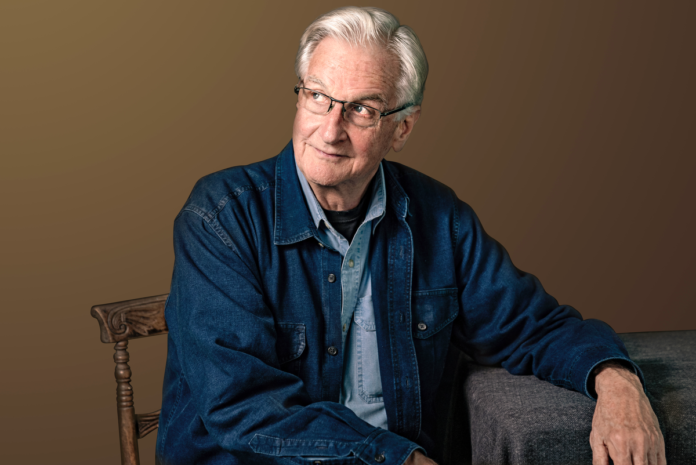 ‘His Last Letter’ is the most ambitious project ever undertaken by the Americana legend Geoff Muldaur; an 18 song tour de force in a long line of highly-acclaimed recordings by this venerable and highly respected musician. Recorded in the Netherlands, Muldaur takes us on a wide-ranging musical journey, collaborating with some of the finest classical and jazz musicians in that country to present stylish renderings of tunes from the American folk and jazz ‘songbag’, musical settings for the poems of Tennessee Williams, tributes to heroes such as Jelly Roll Morton and Duke Ellington, plus original compositions.

These recordings are available in high-end packages that include a 2xCD with book and a 2xLP box set with a 12″x12″ book that includes photos, a foreword by composer David Amram, plus extensive track-by-track notes and personal stories by Muldaur. A true collector’s item, ‘His Last Letter’ will appeal in particular to listeners with an interest in American culture of the 1960s/70s, while its musical mix of classical, jazz, blues and Americana is the very epitome of ‘eclectic’. It also serves as an impressive retrospective of what has been a fulfilling career, a refreshing and vibrant modern classical/crossover mix that profiles Muldaur as an ever-creative artist who remains committed to developing his favourite music into the future.

Muldaur first had the idea of recording some chamber works he had been working on – pieces for violin, cello, clarinet, bassoon and French horn – in the late ’00s, and for the next ten years found himself crossing the pond 2-3 times a year to rehearse and record in Amsterdam.

Producer Gert-Jan Blom soon came on board and utilised his address book to find the most skilled musicians, studios and engineers in the country, with Muldaur recalling that “as my arrangements and compositions evolved and different ensembles were needed, we found key players from the Netherlands Philharmonic Orchestra, Radio Philharmonic Orchestra, Residence Orchestra of the Hague, the Asko | Schönberg Ensemble and Metropole Orkest. We also engaged freelancers on a variety of instruments, including our fine mezzo-soprano Claron McFadden.” McFadden shines on ‘My Little One’ (a musical setting for a Tennessee Williams poem) and especially on the album title track, which appears as the second movement of Muldaur’s own ‘Octet in Three Movements’ for soprano, string quartet and wind instruments.

The genesis of ‘The Last Letter’ dates back to 1977 when Muldaur found a box at his family home that contained a newspaper article from almost a century before about the sinking of the USS Oneida in Yokohama harbour. The ship’s Lieutenant Commander was his great-grandfather. Years later, in 2012, Muldaur received another box of historical records, “this time from the estate of my cousin. In it were letters sent from Japan by my great-grandfather to his wife in New Jersey. Among them was a love letter written the day before the USS Oneida left Tokyo for home.” As the ship left Tokyo Bay in heavy fog, it was rammed, sunk and abandoned by a British steamer out of its lane. Letters from survivors and military officers, newspaper articles and a US Senate report described the event. ‘His Last Letter’ was conceived from these sources.

Geoff Muldaur is not only one of the great voices and musical forces to emerge from the folk, blues and folk-rock scenes that emanated from the US East Coast over half a century ago, but he also lived in the legendary Woodstock for many years and played at the Newport Folk Festival several times when the original Americana/folk genre was at its height.

During the 1960s and ’70s, he made a series of highly influential recordings as a founder member of the Jim Kweskin Jug Band and later with Paul Butterfield’s Better Days group, as well as collaborations with then-wife Maria Muldaur and notables such as Bonnie Raitt, Eric Von Schmidt, Dr. John, Phil Everly and Jerry Garcia.

During the ’80s, he composed scores for film/TV and produced off-beat albums for the likes of Lenny Pickett and the Borneo Horns and the Richard Greene String Quartet. Muldaur’s definitive recording of ‘Brazil’ provided the seed for – and was featured in – Terry Gilliam’s film of the same title. Composing has been his path ever since, with ensuing releases featuring uniquely crafted interpretations of classic (and often obscure) American material as well as his own unique compositions.