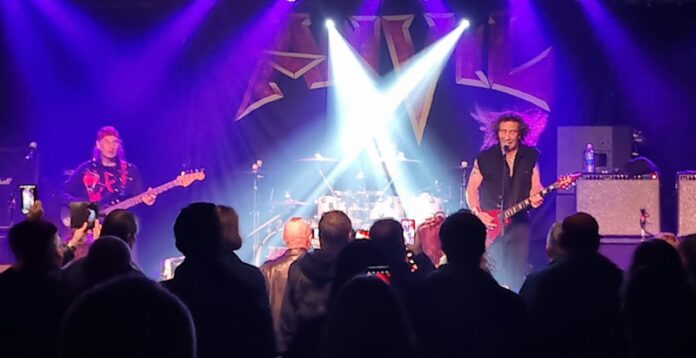 Living Dead Stars founder M.Nox  had two jobs to do tonight. He can do the first one pretty well, like. He can sing and front a metal band like he was born to do it, right down to his studded leather gloves. The other was to print a setlist. He has failed to do that and now he can’t remember what comes next after “In Pieces”. No matter, LDS are here to enjoy their first tour over here in years. They’d formed in the UK, now based in LA, which possibly explains Nox’s dark glasses (“I can’t see you, I’ll take them off”) but nothing can explain new bass player “Shredwin”. He looks like he should be in Steel Panther, he looks like he should give Mr Motivator his leggings back, and looks like he’s having the time of his life. LDS are odd in that they seem to be five random individuals, but when they play “Betrayed” they are clearly living out their NWOBHM fantasies, and when they do “Enemy” it brings to the fore all the Power Metal they can muster – it has seemed they were but a heartbeat away from being a power metal band throughout their set – and their last one “Through The Fire” (“I can remember the last one!” says Nox) has a touch of gravitas. Not that any of this is the main point. That appears to be all about fun. Living Dead Stars are on the Tour Bus with Anvil throughout this trip and they wear the look of a band that are happy to be out of the house and back on the stage – even if they can’t work a printer……

I’ll contend right now that if you like metal, it is impossible not to feel warmth to Anvil. You just look at the band on stage. They are the cartoon group, the larger than life characters. The sort of band that all your mates who don’t like metal think that all metal sounds like.

What’s more, they know it too. They know how lucky they are, to live this life for 40 odd years and even if it hasn’t always gone their way, there’s not a hint of bitterness at any point throughout their hour and 40 minutes.

Steve “Lips” Kudlow starts and ends the show in the crowd, playing his solos and moshing, like some real life Beavis and Butthead, or an unwritten Mr. Men character called Mr. Metal, but all the clowning around cannot – or shouldn’t at any rate – detract from the fact that when they play “666” and the likes, they are as good as they have ever been.

“Ohh Baby” , the pro marijuana “Legal At Last” (which drummer Rob Reiner might take a little too literally……) and “Take A Lesson” are best summed by the song that follows: “Badass Rock N Roll”.

“Winged Assassins”  the anti-war piece is one of a few with a more serious message, and after a story about Lemmy and Metallica, Lips concludes that it “is all about the music” before “Free As The Wind”.

For them it is all about the tunes, obviously, but its equally as clear that the film that came out before “This Is Thirteen” both endeared them to people and invigorated their careers. The title track from it is a cracker too.

Reiner’s moment in the spotlight is “Swing Thing” – and he can play the drums, for sure, whether you like drum solos or not, and “Ghost Shadow” from the new record is impressive for its lack of compromise.

There’s no encore, and credit to them for not being “Rock Stars”. “Metal On Metal” is a de facto encore anyway. Of course encore’s aren’t required if you have no ego and there’s still a feeling that for 44 years Lips and Reiner, and whoever – like Chris Robertson who has been on bass since 2014 – have been living out their dreams. Kudlow could have joined Motorhead when Fast Eddie quite, he tells us: “but why would I leave my best friend?” Why indeed. And that’s the underlying feeling here. That and one other: “You can grow old” Lips had said. “But growing up is optional.” The world needs to be more like Anvil. It would be more fun, and you’d smile more, for sure.