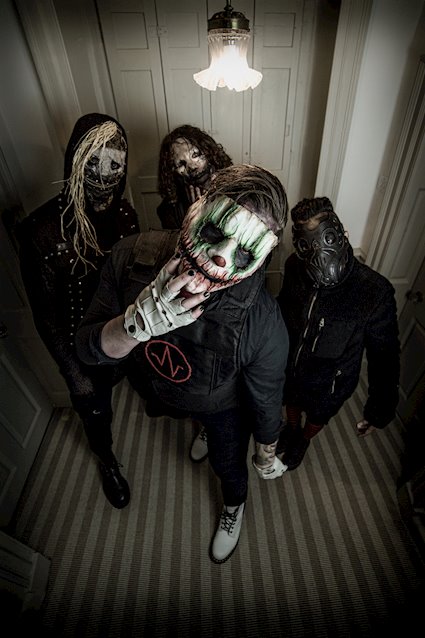 UK masked metallers, Anti-Clone, have revealed a thought-provoking and disturbing new music video for their latest single, ‘Human’. The explosive song is the title track from the band’s forthcoming new EP, out 16th September, and is a welcome return which will cause sparks amongst the metal collective with the song’s stark warning about humanity in the digital age.

Directed by the band and Dead Pixels Photography, the new video demonstrates the abuse of power, and how tyrants use charisma and rhetoric to captivate and ensnare a willing audience. This is counterbalanced with the actions of a lone individual standing up and saying no, albeit through truly extreme means. The visuals echo the message of the song and are played out in the most dramatised version possible, conveying the warning signs we frequently see on our screens everyday.

Anti-Clone vocalist “Peter “CLΩNE” Moore said, “‘Human’ is an anthem rooted in the horror of what it means to be human. Its intention is to hold a mirror to humanity (or lack of) and explore just how far we’ve fallen in the sense that we fetishise war, and that we hold guns and gods above basic human rights, decency and life. Every time you turn on the TV, or read the news,  you are greeted by the same bleak reality be it the war in Ukraine, or the most recent school shootings in the United States. ‘Human’ is a case study into the psyche of the human race and how we can learn to be better.”

Written with cataclysmic recent world events in mind, Anti-Clone’s new EP’ Human’ is a step into the mindset of four people trying to contend with everyday life while the world appears to be burning around them. As a follow up to the group’s ‘The Root of Man’ debut album, ‘Human’ takes on a more melodic, nuanced sound that still promises as much aggression as its predecessor.

The EP will be released Friday 16th September 2022 via the band’s official web media channels.

Previous article
ROCKIN AND RONIN
Next article
SPILL THE GHOSTS