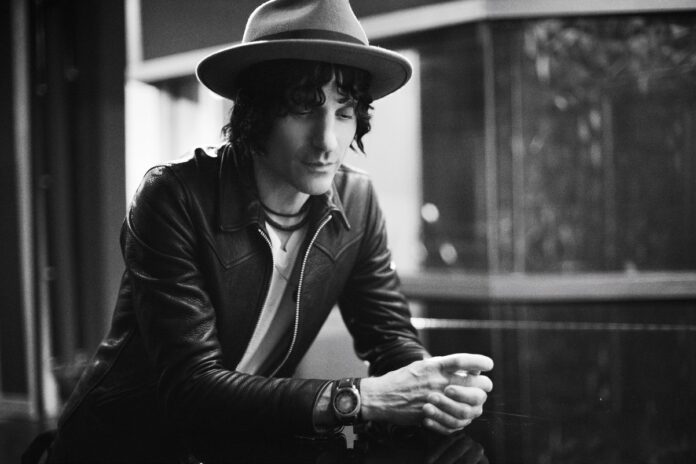 Released in 2003, ‘The Fine Art Of Self Destruction’ was the debut album by New York based singer-songwriter Jesse Malin. “It wasn’t named for drug or alcohol abuse,” he states. “It was more about a personal wreckage when I looked back on my life, from my parents’ divorce to failed relationships, broken up bands, dropping out of school, crashing cars, breaking things. It was more of a spiritual journey in some sense. This record is definitely one of my favourites.”

A video for a new version of the album song ‘Brooklyn’ entitled ‘Brooklyn (Walt Whitman in the Trash)’ that honours New York in days of yore has been directed by Catherine Popper and Vivian Wang. “Cat and Vivian have a great sense of beauty, art and decay,” Malin adds. “‘Brooklyn’ is about beginnings, those early days of innocence and big dreams that often collide with irreversible mistakes and regret. We try to find ways to accept the mistakes and look back with laughter, forgiveness and love.”

Malin arrives in the UK in mid-February for the start of a European tour to promote this reissue, before returning to New York to perform at Webster Hall, where his special guests will include Tommy Stinson (who also guests on the European dates), Lucinda Williams, Butch Walker, Cait O’Riordan (The Pogues), Catherine Popper, Adam Weiner (Low Cut Connie), opener Fantastic Cat, with more surprises to be announced. The European tour dates are listed below.

ltd ed 2xLP
A1  Queen of the Underworld
A2  TKO
A3  Downliner
A4  Wendy
A5  Brooklyn
B1  The Fine Art of Self Destruction
B2  Riding On The Subway
B3  High Lonesome
B4  Solitaire
B5  Almost Grown
B6  Xmas
C1  Brooklyn (Walt Whitman in the Trash)
C2  Downliner (Afterglow Version)
C3  Solitaire (Song for Kelly Keller)
C4  Almost Grown (Busker Version)
D1  Queen of the Underworld (Cantina Version)
D2  Cigarettes and Violets ’22
D3  High Lonesome (PBR Vacation)
D4  Xmas, Etc.

THE FINE ART OF SELF DESTRUCTION
(20th Anniversary expanded edition)
2xLP  |  digital
out 17.02.23
(One Little Independent)
contains bonus LP of the album reimagined and re-recorded
pre-order/save