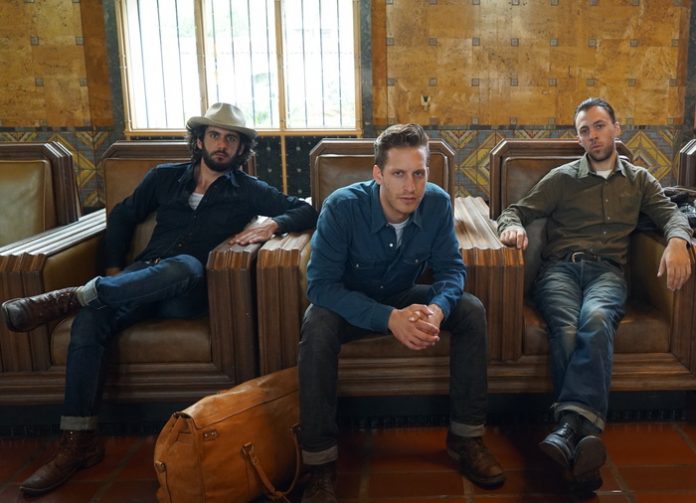 April 28, 2017
Reading time: 4 min.
Facebook
Twitter
Pinterest
WhatsApp
Linkedin
Email
Print
Telegram
Copy URL
By Andy Thorley
“The Right Stuff” is the new single to be released by new Loose signing, The Americans.
Hailing from Los Angeles, the quartet blend country and blues with a fiery blue collar rock’n’roll attitude, absorbing and reconfiguring the history of American music from Chuck Berry and Tom Waits to Bruce Springsteen. The Americans have appeared on US TV talk shows such as The Late Show with David Letterman, and served as a backing band for Lucinda Williams, Nick Cave and Courtney Love. They will release “The Right Stuff” as part of a four-track EP in April, with a one-off show at Sebright Arms in London on 3 May.
“The Right Stuff” is a bold and intoxicating calling card. The track invites the listener to enter a windswept world of regret and rebellion, whilst singer Patrick Ferris weaves literate and impassioned stories, rich in history and underpinned by frustration. As he remarks: “Winston Churchill told his alma mater, ‘never give in… never, never, never never….’ You don’t often hear the end of the sentence: ‘except to convictions of… good sense.’ ‘The Right Stuff’ is about taking a shot at something and then quitting, not necessarily gracefully, but because it’s the best option left.”
The band named themselves after the controversial photo series by Robert Frank, which was first published in 1958 with a forward by Jack Kerouac. Like Frank’s photos, The Americans’ songs are miniature biographies, intimate and empathic portraits of individuals that leave much unsaid.
The Americans were plucked from obscurity by Jack White, T Bone Burnett and Robert Redford to appear in the forthcoming documentary American Epic, which is due to be shown on the BBC starting on 21 May. Directed by British documentary filmmaker Bernard MacMahon, it features artists such as Beck, Elton John, Nas, Willie Nelson, Alabama Shakes and many more. The film reconstructs the story of the first American music in the 1920s and re-assembled the recording apparatus that was used at the time. As experts in early music, The Americans were invited in to figure out the equipment and make the first recordings. Once the sessions were underway, they functioned as the house band, backing up various artists and suggesting songs to the filmmakers. Burnett was quoted as saying; “The Americans are part of this group, these genius 21st century musicians, that are reinventing American heritage music for this century. And it sounds even better this century.”
The Americans are made up of frontman Patrick Ferris, upright bassist Jake Faulkner and Guitarist Zac Sokolow, brought together through their love of American roots music. Spurring one another on, they spent years digging through obscure records and arcane field recordings, busking and teaching themselves banjo, fiddle, mandolin, and slide guitar. They were deep into a purist phase, as Patrick recalls; “We were suspicious of modern rock music. I think we were all curious whether we could summon the spirit of old blues and country through what we’d learned firsthand, and create something brand new, leaving behind the nostalgia and musical aesthetics.”
The Americans‘ debut album seems to have achieved just that. “They’ve shape-shifted back into the modern-day rock and roll band,” writes Cara Gibney (No Depression), “writing contemporary music of their time, incorporating the kernel of their traditional roots, enhancing their rock and roll credentials with the emotional quality of music made generations earlier.”
Their live show, honed over many hundreds of performances, is something to behold. Ron Wray (No Depression) writes, “They’re led by lead singer, guitarist Patrick Ferris, looking like James Dean but even better…. Jake Faulkner, with his dark black beard and jaunty hat, dances across the stage, lifting his stand-up bass like a dancing partner.”  They’ll be playing a special advance date in London at Sebright Arms on Wednesday 3 May, with further UK shows to follow later in the year.
Live dates:
29 Apr – KILKENNY ROOTS FESTIVAL – 10.30pm Cleere’s
29 Apr – KILKENNY ROOTS FESTIVAL – 1pm Cleere’s
30 Apr – BELFAST, Voodoo (Cathedral Quarter Arts Festival)
03 May – LONDON, Sebright Arms (single launch party)
Previous article
Trouble Said Knock Me Out
Next article
Vukovi Embrace Their Weird