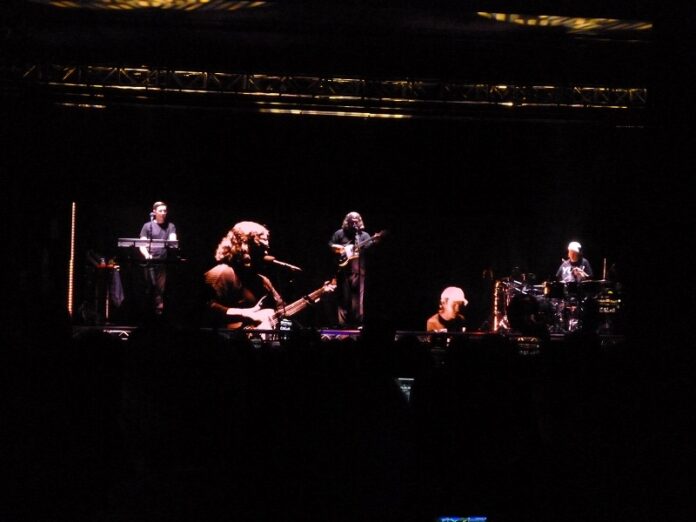 I arrive at the venue as support act American indie folksters Wilderado walk on stage. The band originally from Tulsa Oklahoma are now based in Los Angeles and comprise Max Rainer (lead singer, guitar), Tyler Wimpee (guitar), Justin Kila (drums), David Arthur Stimson (bass) and Jack Malonis (keyboards, guitar). They proceed to entertain us with thirty minutes of a well-received set that is a kind of mix of college rock, indie and tinged at times with Americana. They released their self-titled album last October and shared a few tracks from it with the quite hypnotic `Stranger`, bouncy `Astronaut`, fast paced `Head Right` which seems to hint at getting yourself in the right frame of mind, the upbeat `Surefire` and harmonic  `Outside My Head`. We also had `Morning Light` which was about going home before they closed out with `Rubble To Rubble` which seemed awfully like `What`s Up` by 4 Non Blondes. The band are back in the UK in October for a short tour but sadly won`t be playing Birmingham.

Tonight, was the conclusion of a baker`s dozen of gigs around the UK and Ireland for alt-J in support of their latest release `The Dream`. The show commences with `Bane` from said release with it`s quite dreamlike synth and guitar chord texture before they head into `Every Other Freckle` and `In Cold Blood`. The quite eclectic `Deathcrush` and the chanted `❦ Ripe & Ruin` are aired before the spellbinding `Tessellate`.

The dreamlike `U&ME` blasts out before this packed audience singalong and record `Matilda` on their mobile phones with almost zealous passion. `Chicago` begins quietly before building and is quickly followed by `Something Good` with it`s fairly tribal beat before it mellows out. We hit a more hypnotic seam with a trilogy of numbers in the shape of  `3WW`, `Bloodflood` and ` The Gospel Of John Hurt`.

The almost operatic `Philadelphia` and dreamy `Taro` are quickly shared before the South East Asian flavoured `Dissolve Me` and multifaceted `Fitzpleasure` close out the evening.

It doesn`t take too long before the band return for a three song encore with the rocky `Left Hand Free`. `Hard Drive Gold` one of the outstanding cuts from the last album which relates to crypto currencies and `Breezeblocks` from their debut album `An Awesome Wave`.  The trio Joe Newman (lead vocals / guitar), Thomas Stuart Green (drums) and Gus Unger-Hamilton (keyboards/vocals) trek off to Europe next month for festivals before heading to the Southern Hemisphere and back to Europe towards the end of the year. So sadly, unless you are abroad it`s gonna be a wee while before the group return to the UK and as tonight was sold out with a crowd of around 3000, it`ll more than likely be in a much larger venue.

Previous article
REVIEW: BOOZE AND GLORY – RAISING THE ROOF (2022)
Next article
IN THE HOUSE