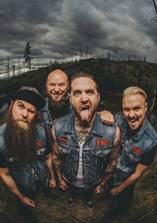 Visceral Canadian rockers The Wild! have landed the opening slot for Airbourne on their November UK tour in the wake of a slew of glowing reviews of their storming debut album ‘Wild At Heart’, released in February on Steamhammer / SPV.

Singer Dylan Villain states that “It was time we took this band international. This has been something we’ve been working on for over a year now. We are very excited to make that dream a reality with our friends at Seaside Touring who are best known for Wacken Festival & their killer roster of bands. Europe/UK… Get ready to party harder than you’ve ever partied. This first tour we announce is gonna blow your damn minds!”

Wild At Heart’, which was produced by Mike Fraser (AC/DC, Aerosmith, Jimmy Page, Metallica, Van Halen), is packed full of blues, punk and southern rock capabilities, all spiced up with classic rock elements. For a tasty sample of this irresistible rock concoction, check out the explosive Stuey-Kubrick-produced video for ‘Ready To Roll’.