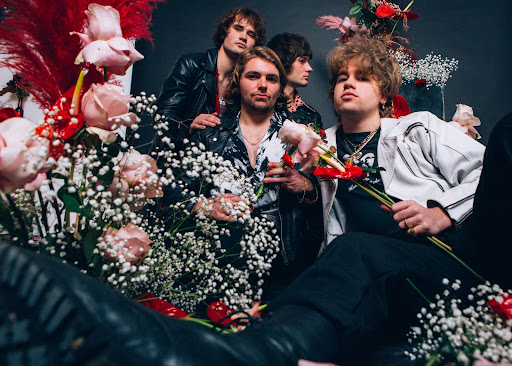 Hot on the tails of earlier releases “I Wanna Be There” and “Holiday In My Head“, “Telephone Love” is a riotous and raging track that blends booming choruses with the pent-up agitation that comes along with feeling lost and listless.

Blending Strokes-esque riffs with the incensed indie-rock sensibilities of VANT or The Pale White, The Velvet Hands explain:

“”Telephone Love” is about being stuck in a loop you can’t get out of. It’s the moment that you realise you may no longer be in control. It’s also the moment that you realise you don’t care if you’re not. Inspired musically by ’80s new wave and ’00s indie, we wanted to make the chorus sound like a party and the verse to sound like the morning after.”

Recorded at The Cube Studios in Perranporth and mixed at The Cave Studios in Par, the track comes as another notch in the band’s ever-growing list of stellar singles.

With production by Jamx Jules and John Logan and with John Cornfield (The Stone Roses, Supergrass) on mastering duties, “Telephone Love” sees The Velvet Hands perfect their knack for live-ready anthems that blister like a late-night blowout while delving into frustrations and forlornness we can all relate to.

The band are also pleased to confirm the release of their second studio album ‘Sucker Punch‘, set to land in early February 2023. Mastered once more by the legendary John Cornfield, who has worked with the likes of The Stone Roses, Supergrass and Muse, the ten-track LP will be released digitally via Jam X Recordings. A limited edition twelve-track physical release will also be available through Blood Records. Standby for further details about the album in due course…

The Velvet Hands are Toby Mitchell, Dan Able, Louis Mitchell and Sam Hilder. Blending slacker story-telling with belting guitar riffs reminiscent of The Strokes or Parquet Courts with rousing punk choruses that recall The Clash, the band formed amidst Cornwall’s blistering garage-rock scene before relocating to London and making a name for themselves on the capital’s underground guitar circuit.

Praised as being “full of bolshy spirit” by NME, the band’s self-recorded debut album was Huw Stephens’ Album Of The Week on Radio 1. Their recent releases have also caused a stir with  range of tastemaker blogs including Fred Perry Subculture, Gigslutz and God Is In The TV, with the latter praising them as “brash garage punk rabble-rousers somewhere between the attitude of early Cribs or Libertines with the death and glory of The Clash.” Recent single “I Wanna Be There” was also awarded Track of the Week by The Rodeo Magazine, who said: “we wanna be wherever The Velvet Hands are because this new song is IT.”

Gaining airplay on Radio X, BBC 6 Music and BBC Introducing amongst others, the band have also supported the likes of Fontaines D.C., VANT, Wallows, Frank Turner and Paul Weller, opened for Liam Gallagher at The Eden Project and headlined stages at Isle of Wight and Y Not? Festivals.

Fresh off the back of a triumphant festival run this summer, including a homecoming show at Cornwall’s Boardmasters, The Velvet Hands also put in an impressive performance at the Pilton Party Auditions Final, where Michael Eavis hand-picked them to support at this year’s instalment of the infamous Pilton Party.

With a run of UK live dates announced for this November, the band will also be hitting the road again early next year to celebrate the new album. As well as an album release show at the band’s local venue Old Bakery Studios in Truro as part of Independent Venue Week, the band will also be embarking on a full UK tour. Set to include their biggest headline date so far at London’s The Lexington, stay tuned for further details soon.