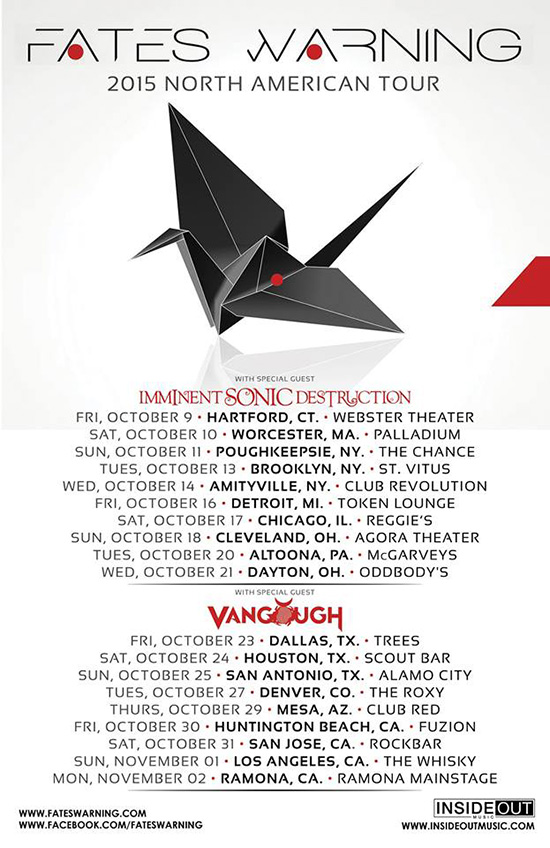 Fates Warning on the road – now!

FATES WARNING will kick off their US Tour tonight in Hartford, CT and runs through November 2nd in Ramona, CA. Fans can expect to hear selections from “A Pleasant Shade of Gray” theirFATES WARNING favorites and more. Support on the first part of the tour (10/9  10/21) comes from Imminent Sonic Destruction and on the second part of the tour from Vangough (10/23-11/2). A complete list of dates can be found below.

Exclusive VIP Packages are still available for select shows and can be purchased HERE. There are two different VIP Packages, the first includes a chance to watch the band’s sound check, meet the band, take photos with the band and a VIP laminate. The second package includes everything from the first package and in addition a SIGNED copy of the deluxe reissue of “A Pleasant Shade of Gray“.

More on “A Pleasant Shade of Gray“:
This all encompassing and expansive collection features the original album on the first CD. The second CD features a live version of the album recorded during the band’s 1998 European tour as well as a sound check recording of “We Only Say Goodbye” and a studio cover version of the Scorpions “In Trance“. The third CD in the package consists of demos from the pre-production and writing sessions for “A Pleasant Shade of Gray“. Finally, the DVD portion of the set consists of two complete live performances of “A Pleasant Shade Of Gray“. The first is a restored and re-edited version of the band’s 1997 VHS release and the second was filmed at The Whisky A Go Go in Hollywood, CA in 1998.