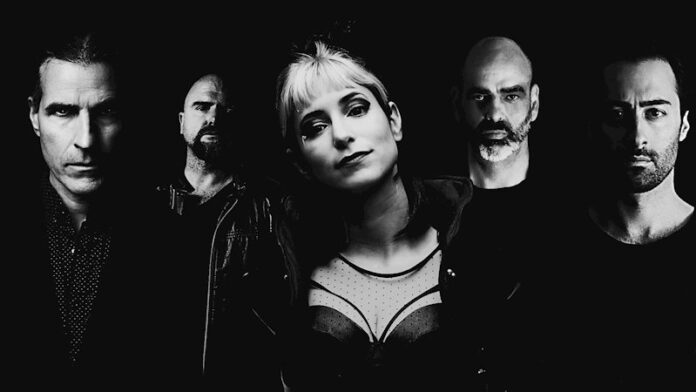 Check out the video here: https://www.youtube.com/watch?v=KEVM-fBlWtU

Alternative progressive rock band TROPE released their latest music video for Planes, a single off their highly praised debut album ‘Eleutheromania‘. Showcasing a more delicate and eerie offering from the band, Planes features beautiful looping clean guitar riffs while a melodic bass line dances over the seemingly basic yet complex drum groove. Soft to frustrated vocals round out the sonic pallet that is Planes, with subtle time changes sporadically placed.

Planeswas filmed in 3 countries due to the band being separated during these times. Vocalist (Diana Studenberg), Guitarist (Joe Ciccia) and Drummer (Sasha Siegel) were filmed in Toronto Canada, Guitarist (Moonhead) was filmed in Sofia Bulgaria, and Bassist (Todd Demma) in Los Angeles, USA, and were edited seamlessly into one space.

Lead singer Diana Studenberg shares, “Planes is about trying to carve out and stay in a creative space and getting constantly torn away from it by reality.. we’re all forced to deal with, in our own microcosms.”She adds, “It’s also about fiercely clinging to an ideology whilst failing to acknowledge that person standing right in front of you. Overlooking the human, clinging to our planes… ‘you should have seen it then’.“

Planes was filmed by 3 separate crews including cinematographers Edward Lim and Joseph Brock (Toronto), Malcolm Guess (Los Angeles), and Simeon Simeonov (Sofia), production assistants Bri and Raine, and was directed and edited by Moonhead. The suits worn by Diana, Sasha and Joe were made by designer Matthew Davignon in Toronto and Jesse Bella did hair and makeup.

Trope will be on tour this May/June 2022, opening for the 25-date upcoming Symphony X and Haken North American tour. Be sure to grab your tickets here: https://linktr.ee/TropeTour

About Trope
Citing influences including Incubus, A Perfect Circle, Soundgarden, Alice In Chains, Peter Gabriel and more, Trope have been busy playing shows internationally at such legendary venues including LA’s Whisky a Go Go and Viper Room. They also played over 50 dates in 2021 at clubs and festivals in Europe, headlining festivals in Romania and Bulgaria.