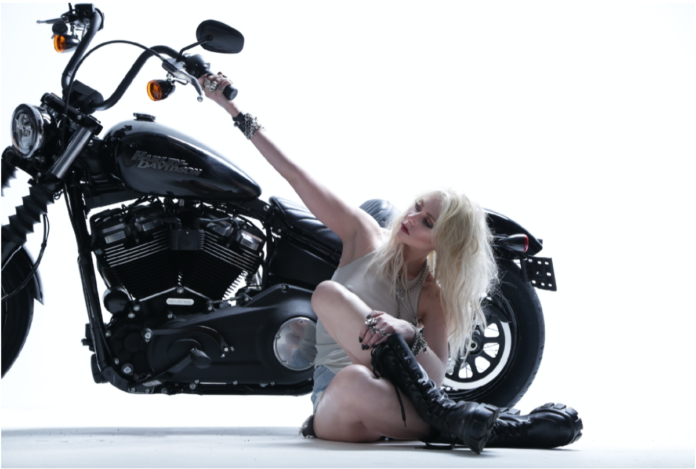 THE PRETTY RECKLESS – Taylor Momsen (vocals and guitar) Ben Phillips (guitar, keyboards and piano) Mark Damon (bass) and Jamie Perkins (drums) – release OTHER WORLDS, a collection of new material, on 4 November via Century Media Records. The band have now shared the video for the stunning acoustic version of HARLEY DARLING from the album:  https://www.youtube.com/watch?v=8beaiQbttkk

The band have dressed down this favourite from previous album Death By Rock N Roll to its bare essence with a stirring and striking performance.

“Harley Darling is a love letter to Kato Khandwala,” says Taylor Momsen. “It’s as simple as that. So many of us have stories of losing loved ones, especially now, and I hope this song can be used in others’ healing as it was in my own.”

OTHER WORLDS collates striking acoustic renditions of some of the band’s own favourites featuring special guests. The recording of Elvis Costello’s (What’s So Funny ‘Bout) Peace, Love And Understanding was Taylor Momsen’s first cover, originally performed for the Fearless At Home livestream in the midst of Covid. As another pandemic-era cover, Matt Cameron played guitar and sang as Taylor powered an airy and lithe reimaging of Soundgarden’s Halfway There, generating hundreds of thousands of views on its initial post. Iconic multi-instrumentalist, producer and artist Alan Johannes handled guitar on the band’s pensive and poetic interpretation of The Keeper, originally by Chris Cornell, while David Bowie pianist Mike Garson performed a stirring piano movement for Quicksand from The Thin White Duke.

THE PRETTY RECKLESS will embark on their first full tour of the UK and Ireland since 2017 this autumn. Tickets available here: https://theprettyreckless.com/#tour

Since 2008 THE PRETTY RECKLESS have given rock n roll the jumpstart it needed and 2021’s Death By Rock N Roll elevated them further to rarefied air. With its impact, the band carved out a place in history as the first female-fronted band to have seven #1 singles on the Billboard Rock Chart. Alongside the acclaim it received in the US from The Today Show, People, Spin, Elle, American Songwriter, Bustle, ABC News Nightline, The Daily Beast and more, the album also debuted at #1 on the Billboard Album Chart. It also notably boasted collaborations with legends such as Soundgarden’s Matt Cameron and Kim Thayil on Only Love Can Save Me Now and Rage Against The Machine’s Tom Morello on And So It Went.

Through and through THE PRETTY RECKLESS didn’t simply throw the rule book out of the window, they set it on fire on the way down. Introducing a bold vision unlike anything this era had seen, Momsen’s bluesy seductive howl collided with revved-up and raucous rhythms, sweetly stoned melodies, and enough unpredictability in the studio and on stage to bring the danger back to rock n roll. By sticking to their guns, they reaped the rewards of such uncompromising fearlessness. This boundlessness drives OTHER WORLDS, where they deliver their first proper acoustic recordings, unexpected covers and other reimaginings, entering new territory once more.

“For a long time, we’ve been trying to figure out an alternative way of releasing music, including songs that we love that didn’t make or records,” explains Momsen. “We found a way to do this coherently and consistently with Other Worlds. We’re a rock band, so there are lots of electric guitars on our records. However, we’ve had incredible feedback from our fans about our acoustic performances, and we had never put those out in any real format. So, this is a different take on the traditional format of a record, and a stripped back version of us that our fans haven’t really heard before. But it’s still us.”

“You get to hear a different side of Taylor’s vocals,” adds Ben Phillips. “It was a chance for us to see what she would sound like singing songs by people who have inspired us. It also gave us some perspective of where we need to go and what we need to be if we want to that good.”