A Beaut From Mute 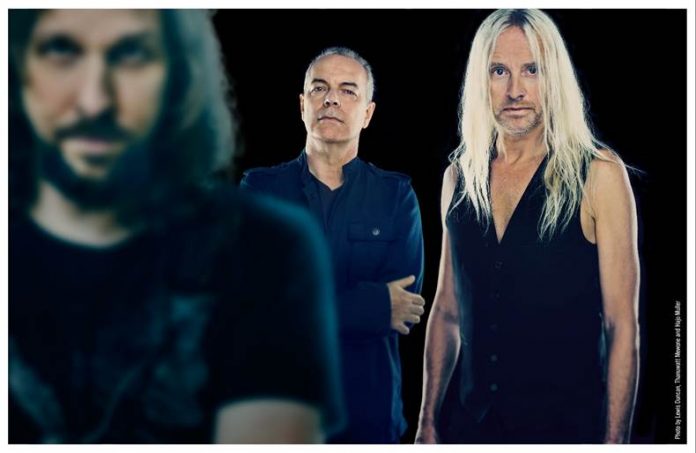 New album due in February

Nick Beggs (Steven Wilson, Steve Hackett), Roger King (Steve Hackett) and Marco Minnemann (Joe Satriani, Aristocrats) will return as The Mute Gods with their forthcoming second album ‘…tardigrades will inherit the earth’ set for release on the 24th February 2017. Following the release of 2016’s debut album ‘do nothing till you hear from me’, and a Progressive Music Award 2016 win in the Vanguard category, the trio deliver adventurous rock effort infused with timely perspectives on the state of religion, politics, media, and the environment.

The Mute Gods examine these and other major queries facing our planet on its second album for InsideOut Music. It’s a darker, deeply thought-provoking follow-up to its acclaimed 2016 debut recording Do Nothing Till You Hear From Me. It picks up from where the first album left off, with its examination of societal control mechanisms, and looks at the inevitable outcomes should we continue down dark, dogmatic pathways. Musically, the album is an expansive rock effort with a heavier, more metal-oriented focus than its predecessor, yet steeped in melodicism and addictive hooks.

Nick Beggs had this to say:

“I know I’m not the only person who feels the way I do,” says Beggs. “Other people understand the state of the world and what’s at stake as we make one terrifyingly bad decision after an other. This album asks people to take off their rose-tinted spectacles and consider the reality facing us. At this point in my career, I feel strongly that it’s important to use music as a vehicle for truth, not just feel-good entertainment.”

The album will be available as a limited edition CD digipak (with bonus track), gatefold 2LP + CD & digital download. The full track-listing is below:

4.   The Dumbing Of The Stupid

6.   Tardigrades Will Inherit The Earth

Pre-order the album now from Burning Shed a receive a signed postcard while stocks last:https://www.burningshed.com/store/InsideOutMusic/

The Mute Gods was founded in 2015 by Beggs, a celebrated bassist, Stick player, songwriter and vocalist who has sold more than three million records with his own groups. His contributions also grace the work of myriad artists and genres, including progressive rock, pop, Celtic, funk, and soul.

Beggs records and tours with Steven Wilson, one of the best-selling alternative rock artists of this generation, as well as Steve Hackett, formerly of Genesis. In addition, Beggs has worked with legends across the pop and rock worlds, including Belinda Carlisle, John Paul Jones, Gary Numan, Kim Wilde, Englebert Humperdink and Seal. In the progressive rock realm, he’s also performed with Steve Howe, Iona, Lifesigns, and Rick Wakeman.

Unlike the debut Mute Gods album, which included many special guests, Beggs chose to keep this release to the core trio ensuring a laser focus and consistency throughout. Roger King, the album’s keyboardist and producer, also works with Beggs on Hackett’s sold-out world tours. King has long been Hackett’s right-hand man, serving in production, arrangement and writing capacities for the guitarist. Marco Minnemann, considered one of the most important, explosive drummers of our time, has worked with Beggs extensively on many Wilson tours and recordings.