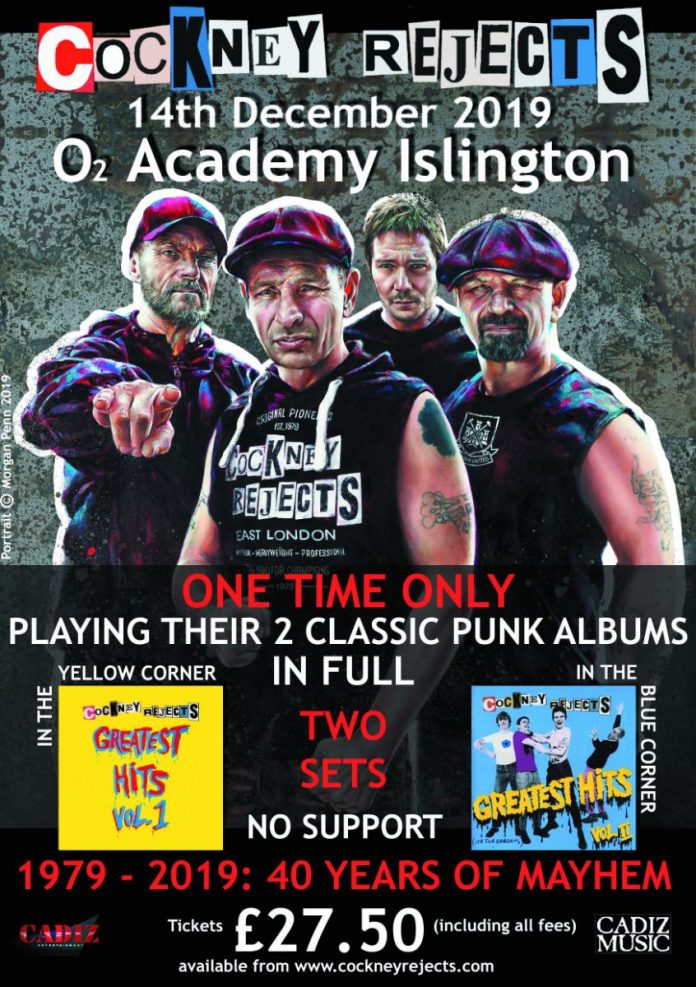 Cockney Rejects have chalked up four decades of uncompromising music in a career that has taken them around the world, from the East End to the Far East! With 2019 marking this milestone, the band are celebrating with a Book, a limited edition Signed DVD – both released in October – and a career-spanning show!

The book, by Mick Geggus and entitled ‘Life After Lloyd – A Rock n Roll Tale’ is an unflinching look back at the road that Cockney Rejects have travelled since forming all those years ago. There will also be a limited edition of fully signed copies of the DVD of ‘East End Babylon’ the acclaimed move that tells the band’s story. The film was directed by Richard England (executive producer of Oil City Confidential) and edited by Henry Stein (recently edited Celebration Day – Led Zeppelin). Additionally, on 14 December 2019 there will be a special live performance at O2 Academy Islington, where the band will crash through a set comprising their ‘Greatest Hits 1 and 2’ albums in sequence. This one-off show will be recorded for release on vinyl and DVD in 2020.

As if that wasn’t enough for Rejects fans, a stunning artwork by Morgan Penn, a huge Rejects image created onto a steel base, will be prominently exhibited in both the East End and Southend [more details on where to see it at www.cockneyrejects.com].

Formed in the turbulence of late Seventies East London as an answer to the dominant art school punk, Cockney Rejects cornered their patch with their brand of terrace singalong classics and a white hot live set. Signed by EMI after playing four local gigs (less than The Pistols!) they found themselves playing sell out tours across the UK and seeing their debut album storm the charts. Top of the Pops appearances followed, which became the stuff of legend as the band ran amok, finally being banned from the show. In recent years they were discovered by a new fanbase such as US bands Rancid and Green Day; Russian firebrands Pussy Riot covered “I Am Not A Fool”. The Rejects were fiercely working class, the band eschewed the political ramblings of punk’s first wave and sang about their own circumstances. Joe Strummer famously said that, “The Rejects were the real deal”, whilst Morrissey reckoned, “Jeff Turner was obviously singing to avoid killing someone.”

40 years is a serious anniversary for any act to celebrate, and Cockney Rejects are not ones to miss an opportunity to seriously make some noise. As well as the Book, Signed DVD, London show and Artwork there will be more festivals and live shows all over the world!