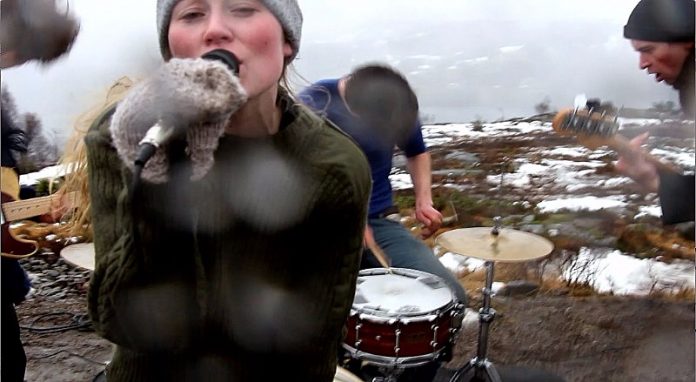 Activism meets anarchy in sub-zero surrounds – a “frenzied call to arms” deserves no less, with SLØTFACE’s new video for ‘Sponge State’ echoing the band’s signature screed with rallying force. It sees them embroiled in a peaceful protest against a government-approved Nordic Mining post dumping more than 250 million tonnes of chemicals and waste in the fjord at Førde, Norway.

The track itself is a reaction to the “apathy and lack of action that is symptomatic of our generation,” explains vocalist Haley Shea. “It is about the fact that making the world a better place isn’t about sharing a post or tweeting… real change comes about by doing things and being an active participant.”

More than 80 people were arrested during the three-week protest – from February 1st2016 – with the young activists fined in excess of $100,000 USD and targeted in a Nordic Mining lawsuit to the tune of $250,000. Charges were thankfully dropped earlier this month. SLØTFACE live to tell the tale with a slap on the wrist and collective ban from the Nordic Mining site. Read their story below…

SLØTFACE STATEMENT: “A friend of ours told us that he was going to join the Natur og Ungdom protests against Nordic Mining in Førde. One week later, we found ourselves sitting in the band mobile (our Soccer Mom car) with our random ass friend Samuel, and all our gear, en route to Førde to play a show for the activists.

After an eleven-hour drive, four ferries and a fucking blizzard, we finally got our gear up the mountain and played a show for the chained-up activists and some Finnish workers. Best audience ever. Eventually the boss man from Nordic Mining showed up and called the cops – the protesters were arrested, and each received a $1200 USD fine, and we got banned from being on the mountain.

The activists received more than $100,000 in fines, and were sued for an additional $250,000 – a Nordic Mining lawsuit that was dropped in April 2016. Nordic Mining still has permission from the Norwegian Government to continue drilling and dumping waste in this Fjord, and other fjords, and researchers are unsure of how this will affect the eco-system. Not cool to fuck up our fjords!

Natur og Ungdom are still bravely fighting this cause and many other important environmental causes in Norway. We hope that by showing these brave, young people in our music video, other people will take action and stand up for things they believe in. For more information, visit: http://savethefjords.com”
_ _

Fresh from headlining London’s KOKO for Øya vs. Club NME, SLØTFACE return to the UK for Live At Leeds this Saturday, April 30. They are also confirmed for Secret Garden Party over the summer, with a string of additional dates to be announced.