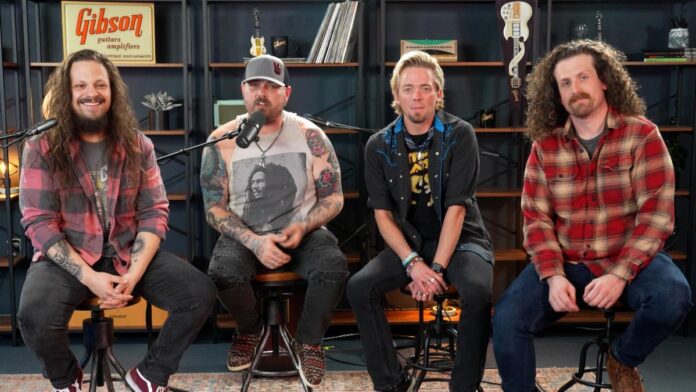 The event will present a live performance captured at Nashville’s The Skydeck, alongside an in-studio Q&A conducted by long-time friend Lzzy Hale of Halestorm. Additionally, an acoustic performance together with Hale, premieres as part of this special event to commemorate the band’s 20 Year Anniversary.

On Wednesday 7th December, the world premiere broadcast goes live for fans in the UK and Europe at 8.00pm GMT.  Additional premieres will follow at 8:00pm Eastern and 8:00pm Pacific time.  After the first day of airing, the stream will remain available to watch ‘on demand’ until 8.00pm GMT on 11th December.

“On a very chilly night in early April when most people would want to be INSIDE enjoying their drinks, we opted to play on a rooftop in downtown Nashville, TN!  With quite literally no ceiling above us, we teamed up with StagePilot to bring you this memorable show PLUS some incredible bonus content, including interviews with the band and our friend Jared James Nichols, acoustic performances, and a very special Q&A on how the band got started and where we’re headed, hosted by our dear friend Lzzy Hale! A celebration of BLACK STONE CHERRY that we know any Cherry Head will absolutely love!”

“It was an honour to celebrate BLACK STONE CHERRY’s 20th Anniversary with the boys!  I had a blast taking them down memory lane, and of course, getting to perform a special acoustic version of ‘Peace is Free’ with them. It’s been a pleasure to call these talented men family!  Here’s to the next two decades!”

Check out the show trailer below.

Looking forward to January 2023, BLACK STONE CHERRY will embark on a massive co-headline UK tour with their friends in THE DARKNESS.  Tickets are moving fast and available now HERE.