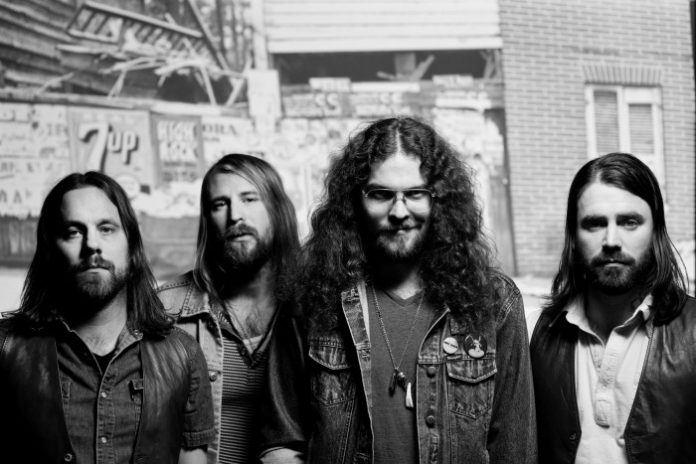 Sittin’ Heavy is 11 tracks of high-octane, foot to the floor, raucous rock that picks up from where 2013s incredible Juno Award nominated Furiosity left off. For the past two years since the debut dropped they have been hell-bent on putting Hamilton, Ontario on the rock ‘n’ roll map as they have, in true road warrior style, relentlessly been tearing through Europe, the US and Canada opening for the mighty; Gun’s n Roses, Slash, Alice in Chains, ZZ Top, Buckcherry, Rival Sons andVista Chino as well as stepping up for blistering sets at the UKs Hammerfest and Download Festival.

The Juno award winning, Eric Ratz returns as their sounding board, studio guru and co-producer; with a track record that includes Billy Talent, Three Days Graceand Cancer Bats, Ratz’ studio wizardry is displayed sublimely on Sittin’ Heavy and must surely mark him out as a future heavyweight.

The new offering is a gloriously cathartic statement that retains all of the ingredients that enabled Monster Truck to break out of the box; groove, sludge, stoner rock, grunge and vintage sounds all swirl around in a colossal melting pot that continues their evolution and expands upon ideas established from their inception.

The months on the road has served to improve them as a band, just as it should, fundamentally because they looked around and learned.  “Touring the last record we’ve been privileged to play with a lot of great headlining acts,” says guitarist Jeremy Widerman. “For instance, when we opened for Slash we would pick up on how accurately he controls the Wah pedal, and we wanted to include some of that in our own songs. Or touring with Alice In Chains and watching their vocal harmonies and realising that we needed to strengthen up in that area – so we did. There are so many little ways to hone our sound.”

If the album has a theme, it would be a steadfast refusal to be beaten down. Lead track Don’t Tell Me How To Live has been unanimously welcomed as a rallying cry. Inspired by a comment made by singer and bassist Jon Harvey’s girlfriend – “She started giving me trouble for playing guitar every day and I replied, ‘This is my job, don’t tell me how to live’” – its message holds true in a variety of situations. “The song is about being independent in one’s life, rather than worrying about what people think or the expectations of other people; just be true to yourself.”

Opener Why Are You Not Rocking? sets the tone, as out of your speakers it blasts the declaration “I don’t care about the weather, the band is here to play, I don’t care about tomorrow, we’re not going any way, all I see is right now, people together…rock n roll might save your life, might save your life tonight” before it throws down the battle cry “release your mind, set your spirit free”

She’s A Witch offers some warning signs as Harvey’s gargantuan wail exclaims “that girls’ got a demon in her soul” whilst  on For The People they’re rising up to fight the evils. Arriving almost halfway through the record, the magnificent, Black Forest is one of those moments of respite. Ushered in by the sound of thunder, the electric piano of Brandon Bliss supplying all-important dynamics and sung with grit and emotion by Jon Harvey.

Another Man’s Shoes, Things Get Better and The Enforcer all further cement their soulful but pounding credentials – with the latter offering up a phenomenally infectious rhythm section stomp and stadium filling handclapping before erupting into a mosh-pit blitz and then back again.

To The Flame sees them at their sludgy and stoner best as the grinding riff channels through the lines “there’s no way out of here” which whips into the freneticNew Soul, a stomping love song that wraps itself around you and refuses to let go and finishing with Enjoy The Time, signs off with a plea to live in the moment before the really bad shit starts happening.

“Yeah that’s it, basically,” Jon Harvey nods. “It’s a theme that we touch upon a lot. We’re saying don’t give up. Don’t put yourself down. I’m not a preacher but it’s important that message gets driven home.”

“There’s no need to raise the horns in the air from the start right to the finish,” Jeremy Widerman declares. “So the slower tracks are there to add colour, and that’s something you’ll hear a little more from us on future records. We’ve got people in the band who can really sing, so it would be foolish not to.”