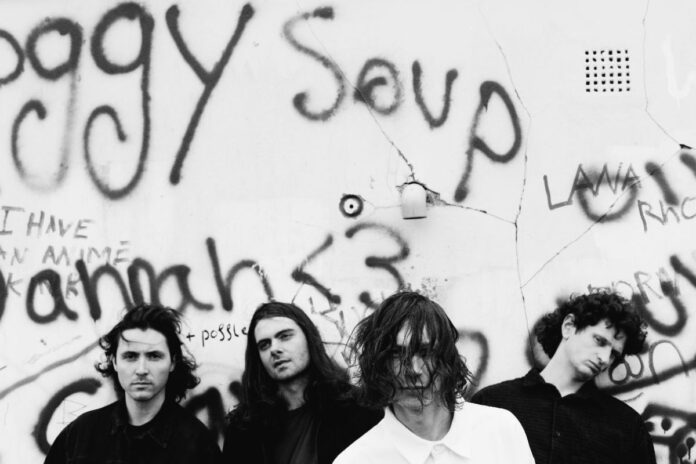 October Drift have released their brand new single ‘Waltzer’, the latest song to be taken from the forthcoming second album I Don’t Belong Anywhere. The album will be released on October 14th via Physical Education Recordings and is available to pre-order here.

Featuring deliciously raw riffs alongside a melancholic yet propulsive rhythm, ‘Waltzer’ plays like early Smashing Pumpkins as the band reflect battling the darker depths of the mind.

Regarding the single frontman Kiran Roy says, “‘Waltzer’ always makes me think of Robert Eggars film The Lighthouse. The isolation and spiralling madness of the film really echoes with this song. I guess it’s mainly about the fog of depression. It’s a kind of focus lens on my lowest and darkest thoughts, as well as a reflection of people I love and care about who have themselves battled with these kinds of things.”

‘Waltzer’ is taken from the forthcoming album I Don’t Belong Anywhere and follows the release further singles from the record including ‘Insects’, ‘Airborne Panic Attack’ and ‘Webcam Funerals’, the latter proving a radio hit with great support from BBC 6Music and Radio X.

October Drift have been treating fans to songs from the forthcoming album live at festivals this summer including Tramlines, Y-Not and playing in support of Pearl Jam at BST Hyde Park.

With a phenomenal live reputation, the Taunton collective are set to cement that status on their forthcoming headline tour in October. The 11-date tour will start in Cardiff, Clwb Ifor Bach on October 19th and finish in Exeter, Cavern on October 31st, the band will play The Lexington in London on October 28th. Tickets for the tour are on sale now here.

The band have now also announced a few intimate instore dates for October. They will play Banquet Records in Kingston (14th) and two Rough Trades including Bristol (18th) and Nottingham (17th). They will also be playing a hometown instore in Taunton HMV which is already sold out. Tickets are available for the remaining dates to purchase now along with copies of the record here.