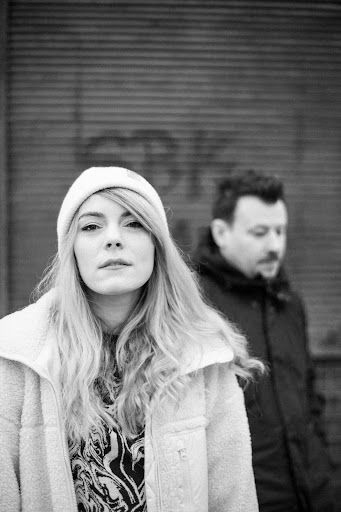 TEMPLE INVISIBLE – have unveiled their arresting new single “Over My Feet”, taken from new ‘Chiasm’ EP coming next month.

Fusing chiffon vocals with impending electronic beats, “Over My Feet” comes as the third single plucked from Temple Invisible’s forthcoming ‘Chiasm’ EP, and boasts the breadth of the genre-defying duo.

Showcasing the two-piece’s knack for creating evocative electronic-tinged tracks that are as dark as they are diaphanous, “Over My Feet” feels eerie and overcast yet optimistic and inviting all at once.

Speaking of the inspiration behind the track, vocalist Irina Bucescu explains:

“”Over My Feet” is like a walk in the forest. It draws its roots from the deep and rich life of the underground — the mycelium. As you progress deeper into the forest, you connect with the life force, inside out, and blend the deeper and more disturbing truths into a multi-layered view of reality. The metamorphosis of death can be a beautiful thing when you walk in the forest.”

With its opening moments unfolding like a silken ballad — gauzy vocals and gentle key taps wind themselves around one another with cushiony ease — the docile ambience is soon underpinned by swirling electro rhythms that steadily threaten to erupt, before overflowing into a meticulous amalgam of rippling instrumentals.

Following earlier singles “Stardust” and “Hold“, “Over My Feet” arrives as an electric third glimpse into Temple Invisible’s upcoming ‘Chiasm’ EP, set for release on 13 May 2022. Featuring four all-new compositions of an awe-inspiring gravity and interstellar ambition, the songs of ‘Chiasm’ are all loosely connected by the love-hate relationship we as humans have with ourselves. Delving into our inner psyches, the EP reflects on those anxieties that pervade our perceptions and how they’re manipulated by fear, but also offers an in-depth examination of how our psyches change through time.

Of the new EP, Irina explains:

“‘Chiasm’ is a crossing point. The point in which the upward current and downward current meet and intertwine in ever-changing patterns. It is about the journey of our psyche – from being one with the universe (“Stardust”), to holding on to the fascination that the small child has for his parents (“Hold”) and the process of maturing. It’s all about the journey.”

Irina Bucescu and Costas Ivanov are Temple Invisible, an electronic/industrial/trip-hop duo formed in 2012 in Bucharest, Romania. The genre-defying duo fuse a unique blend of electronic influences and musical genres combined with a classical sense of composition.

Since releasing their debut single ‘Disappearance’ in May 2014 they have performed regularly at major festivals and venues in Romania, sharing the stage with notable acts such as Orbital, Modeselektor, Actress, Douglas Dare and Bonobo.

With their music playlisted on stations across the globe in  the UK, USA, Russia, Australia, Switzerland, Sweden, Denmark, Germany, Italy, and Portugal, Temple Invisible have also been critically acclaimed by publications such as Clash Magazine, The FADER, VICE, Hunger Magazine, The Line of Best Fit, Richer Unsigned and many more.

Drawing comparisons to the likes of Depeche Mode, Radiohead, Massive Attack, Gary Numan, the band have released two EPs: ‘ENTER_’ (2014) and ‘Void’ (2017) to date.  Losing none of their sci-fi indebted sonic invention or mystic allure in the interim years, Temple Invisible will release their visionary third collection ‘Chiasm‘ on 13 May 2022.