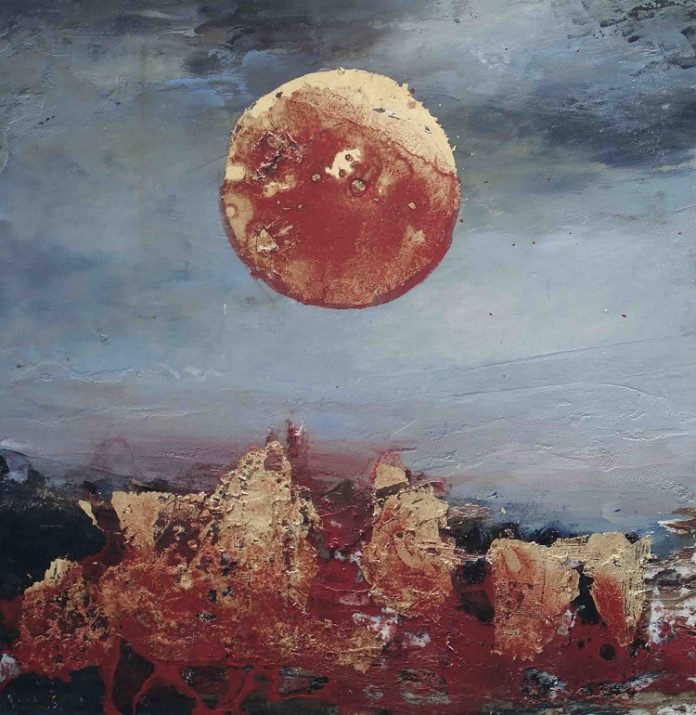 I saw The Stones twice on their just completed tour. Jagger only stopped once in the whole two hours. He was given a ten-minute break and they let Keith sing a couple of tunes. The  guitar playing throughout this would surely mean that Richards, to be fair to him, would approve of these six songs that make up Thirsty’s third offering.

There’s a Rolling Stones element to them, not least because Chris Kimsey, who was their Producer has his hands all over this, but there’s a feeling that anything could happen that would surely appeal.

The second Thirsty album released a couple of years back was surprising. A couple of ex Quireboys members – Guy Bailey and Chris Johnstone get bonus points around here for sponsoring my favourite footballers kit when I was a kid – a Russian poet Irina D, who supplies the lyrics and some vocals and Death In Vegas’ drummer Simon Hanson made for an unlikely combo and those songs made for some unlikely brilliance.

“Nomad” a six tracker including a remix of the title track of that album, is more of the same, and in typical contrary fashion it isn’t coming out on CD, just vinyl and digital. A piece of advice if I may: get the vinyl and lose yourself in it.

Because that’s what they deserve. Right from the ominous sounding, foreboding “Mercury Rising” this is a record for late at night – and Bailey’s vocals here are another reason Keef was invoked at the start.

“Even Keel” is a slice of summery soul, except for the moment when Bailey intones “I want to kill every man in your dreams.” And if ever something made the juxtaposition here between the good and evil if you like, obvious, it is that.

As that probably gives away this is a record of odd contrasts. Odd enough to never sprout a hit, it is nonetheless imbued with a catchy rock n roll spirit. Even the dark blues of “Solar”, sung by D – or more accurately, perhaps narrated – understands the need for structure in a way that Lou Reed, say, never did to these ears.

“Small Talk” even manages to have a country feel, albeit one that sounds like it would smash at any point such is it’s fragility and become the stuff of nightmares largely conveyed by Bailey’s cracked weather beaten voice, while Johnstone’s wonderful piano and some fine lead mesh wonderfully on “Greener Grass.”

“Nomad” is well named because it is made by musicians who wanted to make a journey. It goes to some dark, inhospitable places too, but is a hell of a trip.

NOMAD IS RELEASED ON 31ST AUGUST