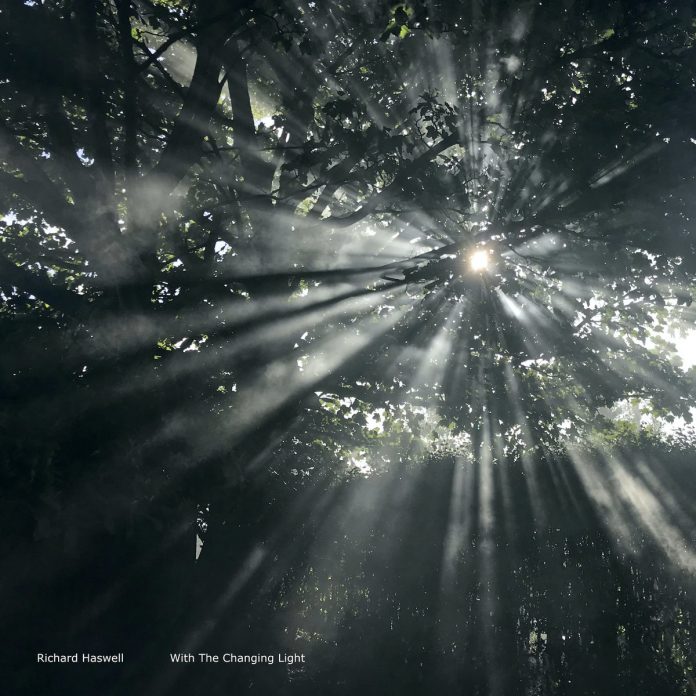 To say Richard Haswell is prolific is an understatement. “With The Changing Light” is the twenty fourth studio album from this Edinburgh-based musician and his first since 2017’s “Lamp Black”. He has released albums under his own name since 2010 but prior to that as Rhubarb, G For Gnome and White Noise. This album was written and recorded between March and December 2020, initially during lockdown. Haswell plays all instruments with remote contributions from Pete Reilly on saxophone, Lewis Kippen on lead guitar, Thomas Urch on bass and Dave Smith on harmonica.

The album opens with `The Promise` with rapid synth keys, drums and bass prior to the distant almost detached vocals joining in this almost retro new wave, synth offering that hinted at early Echo & The Bunnymen meets B Movie. The number offers a positive message of nurturing, preparing, and releasing somebody to live their own life, to be strong and aim to achieve one`s potential in life. The title track `With The Changing Light` has a lengthy instrumental introduction with drums, synth, guitar, and a haunting mesmerising saxophone before Richard`s vocals join in on this tale possibly about a relationship that seems perfect when the narrator is in a dream like state but will more than likely change when they awake. The anguish in the vocals is almost palpable.

`Lost and Found` is a sparse offering with strummed acoustic guitar and piano which mirrors the subject that seems to tell of a relationship ended with just hurt and regret remaining. The way the vocals are delivered along with the emotive guitar solo adds to the feeling of heartbreak. There`s a quite mesmerising instrumental introduction to `From the Bleachers` with a steady bass line, rapid synth beat and a shuffling drum bass that allows the narrator to share a tale of a seemingly unhealthy relationship. Again, we enjoy another delightful bit of guitar shredding mid-way through.

`Cheek By Jowl` seems to relate once more to a difficult relationship or romance set against an interesting musical background. There seemed to have been a drum machine with rapid synth keys and a bass line snaking throughout. The vocals seem almost indifferent, there`s another cracking guitar break and it all ends when you least expect it to. A harmonica alerts us to `Dun Laoghaire 4am` a coastal suburb of Dublin popular for strolls on the East Pier. The song seems to be a reminiscence for happier times with some nice harmonies. A charming nostalgic rumination that had me in mind of The The`s Matt Johnson.

`Shoshone Point` seems to be start point of a hiking trail in the Grand Canyon National Park and like the park itself this feels quite sizeable and atmospheric. There`s a superbly intricate guitar solo part way through with a Hyve Touch synth competing for your attention. It brought back memories of listening to some of Jon Crosby`s VAST project. The album concludes with `Earth Citizen` which has a darker heavier sound with a hazy almost sombre saxophone floating in and out along this mournful journey relating man`s desire to destroy the earth as viewed from the point of view of a visitor to this planet.

There was so much to enjoy on “With The Changing Light” and Richard Haswell is a difficult artist to pigeonhole, but I would say he`s essentially a singer-songwriter with an experimental edge that encompasses acoustic, art rock, folk with a little electronica thrown in. There`s only one other artist/musician that seems to produce as many albums and that`s Stephen Jones or Babybird at over one hundred and twenty. Richard Haswell is heading towards his quarter of a century of releases so enough of a back catalogue for us to wallow in.