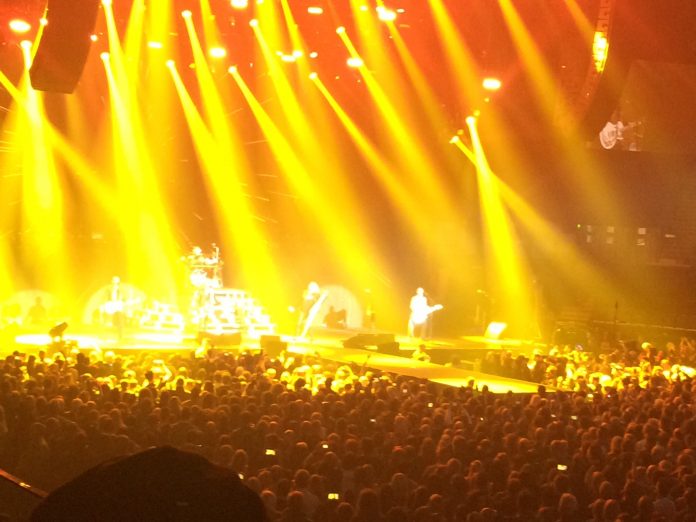 Giants of arena rock….and a band who should be

It’s possible that there’s a harder working band than the Black Star Riders. If there is, Lord knows who. MVM was at the bands first ever gig getting on for two and a half years ago and when frontman Ricky Warwick said that night “we want to play 300 shows a year” it sounded like something to say. Turns out he meant it. Ish. The non-stop road work – not to mention two stunning albums – has meant the band are superbly well oiled. A set tonight that sees them spilt half between their own stuff and Thin Lizzy classics (lest we forget, after all, how this band started) is little short of stunning. “Bound For Glory” and “The Killer Instinct” both sound like the best songs Lizzy never wrote, and “Soldierstown” takes the Celtic theme and runs with it until it can run no more and “Finest Hour” is a real highlight. And when they are bored of writing the best hard rock songs of 2015 they merrily call on the best hard rock songs ever. “Are You Ready?” and “Jailbreak” really are that and are given new life here. If you don’t believe that this is  the band Warwick was born to be in – apart from The Almighty of course – then watch “Whiskey In The Jar” which closes things here. Black Star Riders are phenomenal.

“Get your trousers off?” Responds Lord David Of Coverdale to a shout from the audience. “Madam, I’m sixty-fucking-four”. With that he stops, looks at the woman concerned and flashes her the dirtiest smile imaginable. “Ok, I’ll see you later…….” There’s never been anyone quite like Coverdale, and there’s no band quite like Whitesnake. From their bluesy beginnings – and original guitarist Bernie Marsden and his legendary Les Paul join the band tonight – to arena rockers they are all here. “Fool For Your Loving” and “Here I Go Again” straddle the two worlds brilliantly, and “Bad Boys” still sounds admirably raw. But there’s a welcome third strand to this 90 minutes. Earlier this year Coverdale added Joel Hoekstra – who’s birthday it is tonight – to the band and revisited some of his Deep Purple catalogue. The results were magnificent. “Burn” and the stripped back “Soldier Of Fortune” are equally excellent in the live setting here. Pleasingly Coverdale’s voice holds up better than it sometimes does and this is a set that proves that there’s plenty of life in the dirty old dog yet.

The first line of the Def Leppard’s first song tonight rather sums up their dilemma. “Do you really, really wanna do this now?” is the repeated refrain of “Let’s Go” but it could also be the band themselves asking the question. The Leps, are still the Kings of British arena rock. Everything about their slick set screams that and they have some magnificent songs. “Animal” – which follows “……Go” is not least amongst them and it’s far from the only one. It’s just that they do seem to have rather got themselves into a situation where their fans only want the classics. There is – it has to be said – a rather muted atmosphere for another new song in “Dangerous” and singer Joe Elliott seems to have picked up on this, reckoning that it’s between Newcastle and here for the quietest crowd of the tour. The big acoustic singalong of “Two Steps Behind” feels a little flat for example, and yet when they play the “Hysteria” era material the 8000 strong audience are enlivened and emboldened. Those songs such as Rocket” and a brilliant “Armageddon It” deserve the praise they’ve always had and “Let’s Get Rocked” is still absolute ludicrous excellence. Elsewhere Elliott isn’t perhaps as able to hit the high notes as he used to be and the massive ballad “When Love And Hate Collide” suffers slightly – not that anyone hugging their special one notices too much. The encore songs both come from the tour de force of “Pyromania” and “Rock Of Ages” is huge while “Photograph” is one of the best songs of its type ever made, although here again the singer might be having a slight off night.

Largely though, this was the sort of gig that proves everything you already knew about Arena Rock. Get the right package and the faithful will come out to celebrate. Even if the record selling peak for two of the three might be behind them, these songs endure like the rock of ages they are.