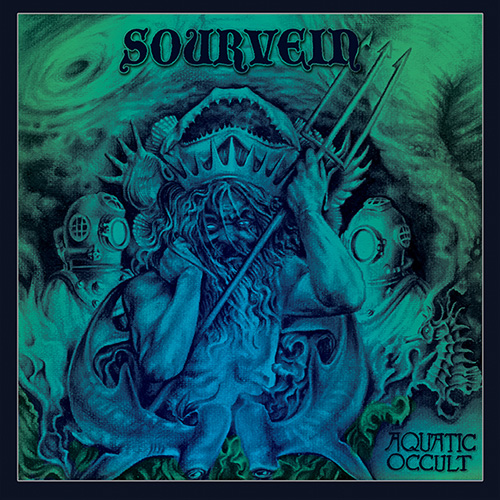 Doom/sludge metal vets SOURVEIN will release their long-awaited Metal Blade Records debut, ‘Aquatic Occult‘, on April 8th worldwide. Featuring guest performances by Lamb of God’s Randy Blythe (vocals, organ), Amebix‘s Stig Miller (guitar), Corrosion of Conformity‘s Reed Mullin (drums) and many others, the album is described by front-man T-Roy as the record he wanted to make at a time when his life was at its bleakest.

With only one week until ‘Aquatic Occult‘ drops, SOURVEIN has revealed a brand new music video for the track ‘Avian Dawn‘, directed by Randy Ada. Check out the video, featuring never-before-seen in-studio recording footage, now via GuitarWorld.com. While there, read an interview with T-Roy detailing ‘Aquatic Occult‘ and future plans for the band: guitarworld.com

T-Roy details the guest appearances on this track and in the ‘Avian Dawn‘ video: “The ‘Avian Dawn’ video is directed/edited by Randy Ada and features live footage of us recording at SSP Studios in Raleigh, NC. You’ll see Mike Dean of C.O.C. on the production board, Reed Mullin of C.O.C. on drums, Kevin Rochelle of Sea of Tyrants on guitar, Lou Gorra on bass and myself recording riffs and vocals. This video truly gives a behind the scenes look at the album’s core performers hard at work. Music wise, ‘Avian Dawn’ is an upbeat song about positive thinking with an overall loose theme surrounding the sea birds of Pleasure Island, relayed as abstract wordplay in the lyrics throughout the song. We really dig this tune and it’s a lot of fun to play. Enjoy.”

“‘Aquatic Occult’ promises to be heavier than a two-ton anchor dropped into an antique porcelain bathtub– it’s going to break things,” comments guest vocalist Randy Blythe. “This record sees Sourvein at their most musical and focused of any recording to date.”