YOUR ROYALE APPOINTMENT WITH LOVE 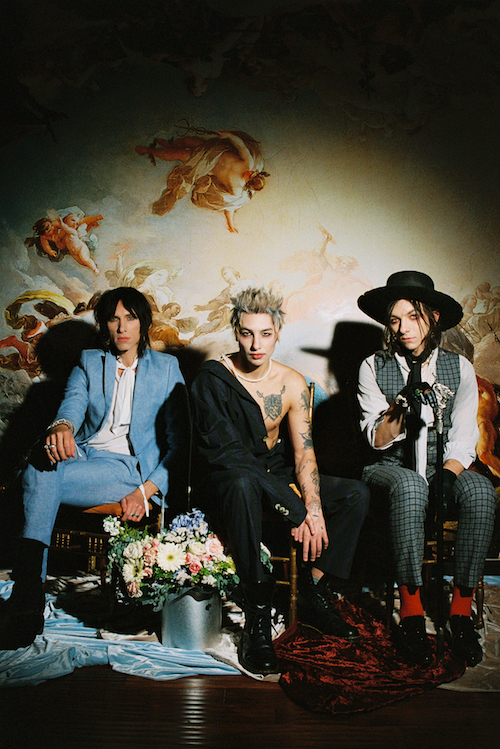 Palaye Royale released the original version of “No Love In LA” along with the exhilarating new track “Punching Bag” this summer.  Both are the first glimpse of more anticipated new music on the horizon, and showcase the band’s bold musical evolution born out of rewarding writing sessions during lockdown.  Listen to the original “No Love in LA” here and watch the colourful music video here.   Listen to “Punching Bag” here and watch the music video here.   “No Love in LA” was penned by the band and Chris Greatti, with GRAMMY-nominated Greatti (Machine Gun Kelly, YUNGBLUD, Grimes, Poppy) producing.

The video for “No Love in LA” has hit an impressive 2 million views since its release, making it the band’s fastest growing viewed video ever.  The song has also amassed over 4 million streams with the band gracing the cover of such notable Spotify playlists as New Noise.  Also making waves at Alternative Radio, “No Love In LA” was notably was 4th most added song at the format in its first week ahead of the official impact date, in the company of Twenty-One Pilots, Billie Eilish and Imagine Dragons.   The track is currently rapidly climbing the Top 40 Alternative Chart.

Known for their fiercely dynamic live shows, tickets are almost sold-out for their headline gig at LA’s Wiltern Theatre on October 1st.  The hometown concert marks their first date in over a year and the perfect setting to play their new material in front of a live audience.   Giving fans a behind-the-scenes peek  at what happens while they’re on the road, the band sat down with Grammy.com’s “Herbal Tea & White Sofas” for a fun chat about touring (watch it HERE). They also recently spoke withAmerican Songwriter about their writing process and reflected on how time spent together making music during the pandemic made for a remarkably creative period.

The gritty and authentic Palaye Royale has earned an obsessive cult-like following, boasting over 345 million streams, 30 million+ YouTube views and 1.7 million monthly Spotify listeners.  Their social following between the band and its individual members is at almost 2 million across platforms and growing.  Living out a wild odyssey worthy of legends, Palaye Royale’s adrenaline fueled, rock n’ roll circus is leading a generation in togetherness through truth, honesty, and change. First landing in Los Angeles as teenagers, the Las Vegas-bred brothers worked their way up through the ruthless L.A. rock scene while briefly living out of their car, soon finding themselves playing arenas with the likes of Marilyn Manson, Rob Zombie, and Stone Sour.  The trio are readying their fourth full-length studio album and follow-up to 2020’s The Bastards.