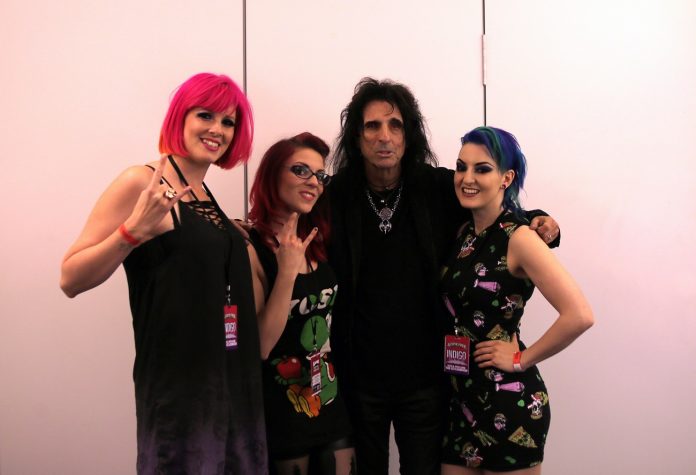 Alice as you’ve never heard him before

Hot on the heels of their massively successful debut at the Edinburgh Fringe Festival – where THE LOUNGE KITTENS hosted eight instalments of their EVERYBODY HATES THE LOUNGE KITTENS show – the girls continue their relentless onslaught of monthly video releases. This time they’ve unveiled the opening track from debut album ‘Sequins & C-Bombs’, and it comes in the form of Alice Cooper classic ‘Poison’.

“This was the first song we ever arranged as a group” Jen (the Red one)tells us. “It was always going to be the first track on the album because it’s such an important part of the TLK story. It’s become a firm favourite with fans and a stalwart of our live shows so it feels great to have been able to give it its proper attention in the recording studio.”

“And Alice Cooper seems to think it’s alright too” Timia (the Blue one)chimes in. “We got to meet Alice at Stone Free Festival and he is every bit the charming legend you expect him to be… and we managed not to pass out or puke up whilst talking to him so I’m guessing he feels the same way about us haha. It’s a massive honour to have the original artist hear our take on their songs and we’re still feeling a little overwhelmed by this one.”

The video sees the girls up to their old tricks again with a dark, sexy homage to Mr Cooper’s original work, with lashings of TLK humour thrown in for good measure. “We worked with a new team for this video because we wanted to give it a really, really glamorous edge” Zan (the Pink one) says. “We shot it at the Murder Mile fetish studio, which was particularly hilarious on a hot summer’s day but Mel [Director Melanie Light] cracked the whip, so to speak, and managed to drag some seriously sultry shots out of each of us… and then gaffa taped us into straightjackets. Standard day’s work for TLK, really.”

As the girls navigate through their challenge of releasing new video material every month until the end of the year, next month sees the culmination of twelve month’s hard work as the album is finally released.

But that doesn’t mean they’re letting themselves off the STOP-EVERYTHING-THE-KITTENS-ARE-DOING-SOMETHING-DAY hook so prepare yourselves for even more Kitten madness, when they embark on a headline tour of the UK.

Catch them with Status Quo & REO Speedwagon in December:http://www.axs.com/uk/artists/250537/status-quo-tickets