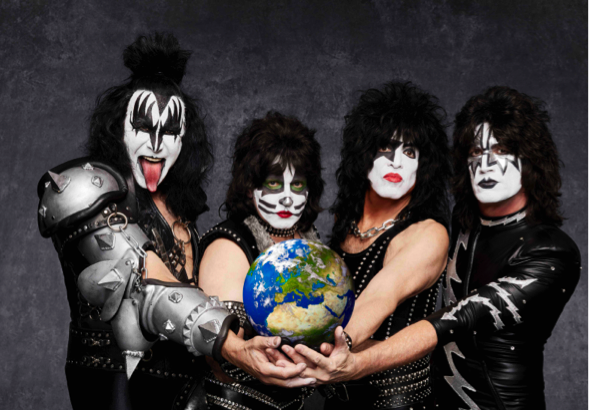 Hot on the heels of a SOLD OUT KISS European Tour through May 2017, Universal Music On Demand are set to release “KISSWORLD – The Best Of Kiss” on the 2nd June 2017.

KISS, America’s #1 Gold Record Award winning group of all time in every category, have a stunning catalogue of rock n roll classics. “KISSWORLD – The Best OF KISS” brings 20 of their best loved tracks together on one album. Iconic fan favourites such as “I Was Made For Lovin’ You”, “Rock And Roll All Nite” and “Detroit Rock City” alongside top 5 UK chart hits “Crazy Crazy Nights” and “God Gave Rock ‘N’ To You II” on one huge collection.

KISS are one of the most iconic and influential rock acts of all time. The band have released 44 albums and sold over 100 million records worldwide. Consummate live performers, the band’s illustrious career is marked by record breaking global tours. Paul Stanley, Gene Simmons, Eric Singer and Tommy Thayer slayed the USA across July, August and September 2016 with a SOLD OUT Arena tour. They heard the calls from their European fans and they returned in May 2017 for the first time since 2015’s series of SOLD OUT Festival and Arena shows across Europe. The 19 date / 11 country tour culminates in a show at London’s iconic o2 Arena on the 31st May 2017.

Tracklisting of “KISSWORLD – The Best OF KISS”