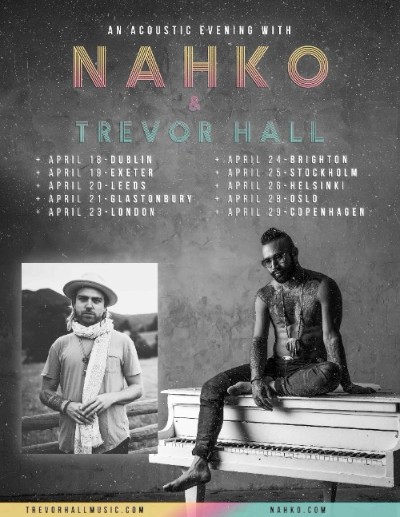 Nahko has announced a UK and European solo acoustic headline tour, starting in April. Commencing in Dublin, it will include five UK dates, including a date at London’s Omeara.

Joining Nahko is singer/songwriter Trevor Hall whose music is a blend of roots and folk music, with hints of inspiration from India, which has led him to a series of sold-out tours and collaborations with artists such as Steel Pulse, The Wailers, Jimmy Cliff, Matisyahu, Michael Franti and Xavier Rudd.

The tour follows the success of Nahko’s debut solo album My Name Is Bear, released last year and featuring the single ‘Dragonfly’, which stars his close friend Paris Jackson in the video.

An intimate collection of tracks tracing Nahko’s formative years as an artist, it is a deeply personal album – the prequel to his work with Medicine For The People, and his most revealing work yet.

Nahko supported the album’s release with a sold-out run of dates in the UK in December, and now returns for this special acoustic tour. A hugely accomplished pianist and guitarist, the shows will bring a different interpretation to both his new solo work and his catalogue with Medicine For The People.

MORE INFORMATION ON TREVOR HALL
Raised on an island in South Carolina, Hall realised at a young age that music was more than just a passion – it was, rather, his life’s art. At sixteen, he recorded his first album, soon after which he left South Carolina for Idyllwild Arts Academy in California. There he studied classical guitar and was also introduced to the practices of yoga and meditation, which would greatly influence his life and his music.

Hall’s latest album, The Fruitful Darkness, became the #1 Kickstarter Music campaign of 2017 and features the new single ‘What I Know‘. It will be released in in 3-song installments (quarterly) on specific lunar dates, culminating in a 15-song deluxe edition release, June 1st 2018.