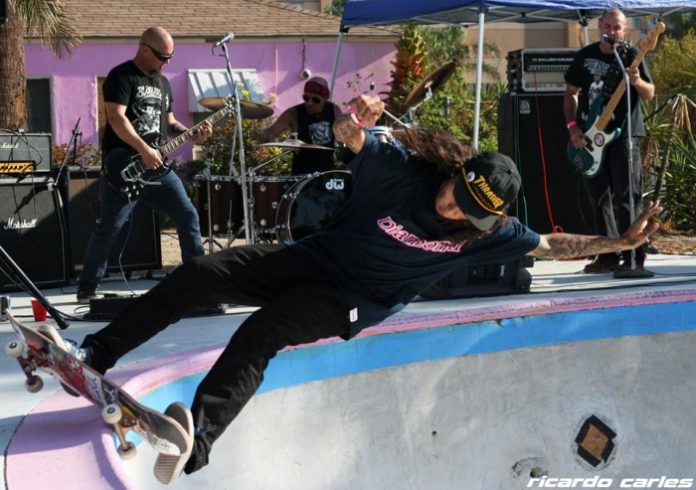 The low desert area of Southern California is a breeding ground to some of underground music’s most well regarded and celebrated acts such as: Kyuss, Fatso Jetson, Unsound, Masters of Reality, Yawning Man and of course Queens Of The Stone Age.  DIY generator parties, legendary venue Rhythm and Brews on Highway 111 in Indio, CA and The Desert Sessions recordings played a big part in the development of the scene and for having music audiences and players looking to the area for new artists/bands to emerge since then.

However, what sets desert natives You Know Who apart is that they’re not a Kyuss clone at all, they play fast, heavy and technical punk/metal, the polar opposite of what mainstream music press has coined the desert sound to be. You Know Who consists of Mike Pygmie, Dylan Brown and Greg Saenz who got together in 2009 after cutting their chops in such bands as Excel, Dwarves and Invitro.  What best describes their sound is taking the technicality and complex time changes of Bl’ast, mix in the speed and tongue n’ cheek humor of Suicidal Tendencies and Mr. Bungle and the virtuoso musicianship from each guy that forges a sound as harsh as the desert heat on a summer afternoon.

Links
You Know Who on Facebook
Shop Self Destructo