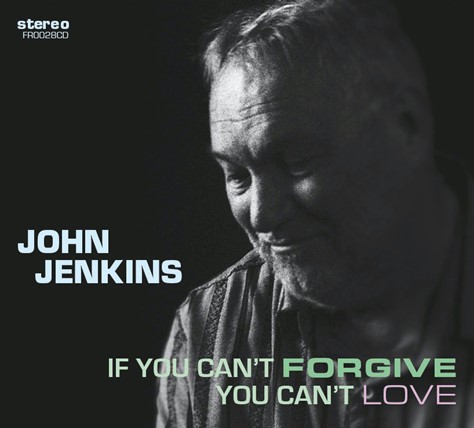 Amidst the tumultuous state of the world, creatives are vying for room to express themselves across the digital space; from virtual co-writes to the challenges of in-person recording and socially distanced studios. But above all this stands the music, and the creative river remains in a constant and necessary state of ebb and flow.

Liverpudlian singer-songwriter John Jenkins is one such artist. His new album ‘If You Can’t Forgive You Can’t Love’ is his first since signing to indie label Fretsore Records.

Welcomed early this year with its first single ‘Desert Hearts’, a sweeping saga of ever-changing landscapes which takes on contrasting themes of turbulence, reflection and solitude. Here, it is the album’s closer. Opened in the Nordic style of ‘A Stranger to Your Heart’, a song that captures the thematic and reflective road trip motif prevalent to the album, a biographical picture of landscapes, connecting characters of one’s past to their ongoing relevancy in our lives.

‘If You Can’t Forgive You Can’t Love’ is an album constructive in its cohesive narrative, encompassing its influences from the Americana and Liverpudlian songbooks.

With influences from John Prine to The Beatles, and Nanci Griffith to Bruce Springsteen, a key influence stands out here, with a reimagining of Townes Van Zandt’s ‘Kathleen’ continuing its prevalence on songs such as the sombre ‘Living Someone Else’s Life’, a tale of regret told through the ache to relive past events and rediscover the emotions attached to them.

“One of the most prolific songwriters in Merseyside… A handsome piece of music, epic, pleasing, a song of sensitivity and difference.” Liverpool Sound and Vision (on ‘Desert Hearts’)

Sonically the album fuses transatlantic influences, elevated by some of the finest session musicians in the Liverpool creative space. Crossing soundscapes in tempo and style, with harmonica, violin and drums collectively and singularly contrasting their own shades of light and dark.

Award-winning artist Rob Vincent lends his skills on BGVs and harmonica, while co-producer Jon Lawton adds a feat of multi-instrumentalism. Amy Chalmers strings are a centre piece of the album and key to its emotional experience as a listener.

The tempo lifts on songs such as ‘When Morning Comes’ accompanied by Dave Orford on drums, and local favourite Lee Shone’s keys add a contrasting flare to the nostalgic lyric accompanying ‘Wrong Side of Sadness’.

Alison Benson contributes as sole duet partner and co-writer on ‘Strangers on a Train’, a future single and haunting ballad that incorporates the intensity of the album’s themes of broken dreams and fractured relationships – think Cat Stevens meets Alison Krauss.

‘The Last Train from Baltimore’, with themes of tragedy and the struggle to overcome is based on a true story; tackling the mature, and ever difficult narrative of accounting for one’s own past mistakes.

“I am really happy with the end result” states Jenkins. “I have songs on here I am immensely proud of. I think it is quite diverse but also definitely has my sound and stamp on the songs.”

‘If You Can’t Forgive You Can’t Love’ is the lyrical soundtrack to an insouciant road trip, soon darkened by thoughts and memories, triggers and reminders of people and places long gone from our lives; a rollercoaster of emotions serving as a 2021 take on Woody Guthrie riding a boxcar.

The themes of travel and transcending landscapes of one’s life is prevalent throughout, embracing all characteristics and contradictions of lonesomeness, regret, sorrow and freedom.

‘If You Can’t Forgive You Can’t Love’ is co-produced by John Jenkins and Jon Lawton (Sami Yusuf, Two Black Sheep) and mastered by Pete Maher (The Rolling Stones, U2, Patti Smith). The album is available on Fretsore Records on 6th August. Fans can pre-order the album via Bandcamp HERE.

‘Kathleen’ and ‘Desert Hearts’ are now available to download and stream HERE.

‘If You Can’t Forgive You Can’t Love’ will be promoted via a UK Tour kicking off on August the 18th.